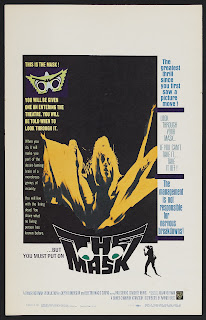 Doctor Allan Barnes (Paul Stevens) is a man with a problem. A brilliant psychiatrist, he is worried about his latest patient, archaeologist Michael Radin (Martin Lavut). Radin's last visit ended badly, with him raving on in paranoid delusions, all about possibly having killed a woman due to instructions from a ... mask.

But not just ANY mask. It is an Aztec sacrificial mask, found on Radin's last expedition - one over three thousand years old and still with the latent power to command men's minds and unlock their basest desires. It has taken hold of Radin, body and soul, and like the world's most addictive drug, is now making him do terrible things. 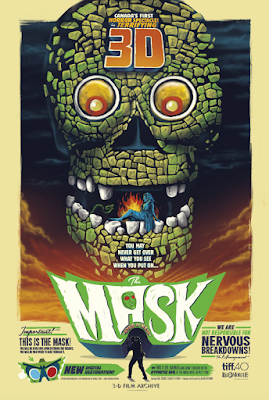 Barnes can not believe this and tries to find a more logical explanation for Radin's psychosis. Radin asks, "Would you like to try the Mask and see for yourself?" Before he can reply, Radin bolts from the office. At his apartment, Radin asks his landlady to mail a package for him, then takes a drink ... and blows his brains out.

Barnes receives the news from Police Lieutenant Martin (Bill Walker), and is upset that he has lost his patient, feeling himself to blame. As the Lieutenant leaves to speak with Radin's employer at the Museum of Ancient History, Pam Albright (Claudette Nevins), Barnes' fiancee' arrives. Consoling him, they both notice the box that has arrived and find it to be the mask. Pam leaves to pick up grocery items and Barnes finds a letter from Radin, challenging him to "Put ... the Mask ... On ... NOW!"

Up to this point, THE MASK is a fairly straightforward thriller. While advertised as a 3-D film, that's only half-true: it is actually only partially filmed in 3-D, showcasing the surreal sequences when the good doctor goes on his hallucinatory journeys via the commanding voice. It was a brilliant conceit that worked well in the context of the film, as the audience is instructed at the beginning to put on their glasses when hearing the voice, thus (by default) making the 'fourth wall' tissue thin, as the audience is, in effect, BECOMING Barnes when he dons the mask.

The 3-D sequences are the real reason to see this film. Executed by the famed experimental filmmaker and special effects expert Slavko Vorkapich (father of the 'montage sequence' in modern films, known to most filmmakers as the 'Vorkapich' effect ... and also the teacher of Art Clokey (of GUMBY & POKEY fame)), they are a true exercise in haunting surrealism. As I was re-watching these sequences, the first thing that popped into my head in trying to describe them was 'Steve Ditko meets Salvador Dali', especially thinking of Ditko's early '60s work on DR. STRANGE and his four-color representation of the astral planes. 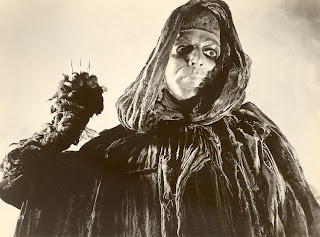 Filled with mask-wearing demons, sacrificial altars, skulls with snakes for eyes and more, the three dream sequences get more and more twisted as the film progresses, symbolizing Barnes' descent into madness and murder. For just as Radin succumbed to the unholy power of the Mask, so now has Barnes. From attempts to seduce and kill his secretary Jill Goodrich (Ann Collings), to forcing the Mask on Pam to drag her down to his mad level and his final confrontation with the police, Barnes has learned (too late) the horrible truth about the Mask ... that he will never be free. The film ends with the Mask on display back at the Museum, with a guided tour going through. A straggler stays behind to gaze musingly upon the Mask ... and the terror begins anew.


I can only IMAGINE what this must have done to staid 1961 audiences at the time! :) Seen today, it's rather goofy, aside from the 3-D sequences, which still hold up surprisingly well. I recall our audience enjoying it a great deal, with many a person repeating the key words, "Put ... the Mask ... On ... NOW!" over and over (and over) long after the show - it became a running gag at the Conjure Cinema shows for awhile. 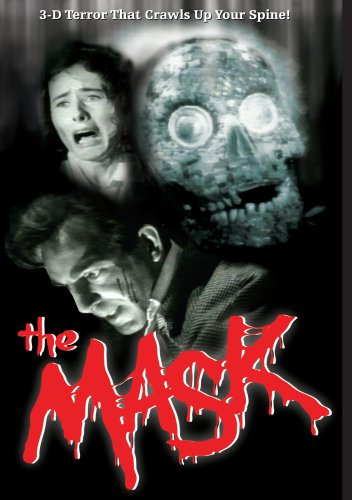 Now, for YOUR viewing pleasure, here's the original trailer for Canada's first and only 3-D film, THE MASK! https://www.youtube.com/watch?v=oJigBoo4DxY   -  intrigued? Then you'll be ecstatic to know THE MASK is available, in all it's bizarre 3-D glory, on DVD via amazon.com! So if you're brave enough (or foolish enough), when YOU hear the voice ... obey the command and "Put ... the Mask ... On ... NOW!"

Next Time: One of my favorite movies of all time is reviewed, Ray Harryhausen's 1963 masterpiece, JASON AND THE ARGONAUTS! See you soon!
Posted by Conjure Cinema Curator at 8:30 AM No comments: