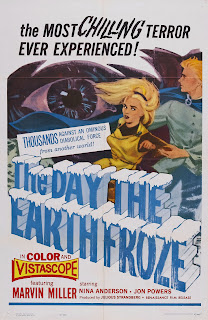 With the arrival of the sweltering summer heat, I felt a change of pace was in order and scheduled this film, which was not at ALL what I was expecting when I first saw it! I knew nothing about it save the title when I first encountered it (as part of the 2009 16mm estate sale I was brokering {see my entry of August 27th, 2009}) and thought it was going to be some 1950s sci-fi feature that I had missed from my youth. I couldn't have been more wrong.

Study the poster at the left. Looks intriguing, yes? Two blond, Nordic types backing away from a giant, alien eye. Then there's the ballyhoo advertising promising "thousands against an ominous diabolical force from another world" (italics mine). Last but not least there's the cast. Marvin Miller I was at least aware of, he of the sonorous voice who had narrated countless films of this type and had done voice-overs on a number of television series, as well as starring in the 1955 TV show THE MILLIONAIRE. The other cast members, however, left me scratching my head. Nina Anderson? Jon Powers? Where had I seen them before? Nowhere, as it turns out ... and thereby hangs our tale ...

Roger Corman, in addition to producing and directing a number of low-budget features of his own, had another talent, which we'll call the 'stock footage switcheroo'. He would find a European feature (usually of the science fiction variety), keep the special effects footage, add his own actors while dubbing over the original ones, and completely change the plots. His best trick of this type was once making TWO separate features with the SAME footage - three years apart!  If you're brave, watch 1965's VOYAGE TO THE PREHISTORIC PLANET and 1968's VOYAGE TO THE PLANET OF PREHISTORIC WOMEN back-to-back. It's brain-numbing!

Roger's company (Filmgroup) purchased the American distribution rights to this film, re-dubbed it, re-cut it, re-voiced it and released it unheralded as the bottom half of a number of AIP double features of the time, after which it was quickly sold off for TV reruns. It's a shame, because the tale of the film itself is MUCH more interesting ...


The original tale of SAMPO comes from the epic Finnish poem, the Kalevala (for more on this amazing work, see this link: http://en.wikipedia.org/wiki/Kalevala). A statue of the author of this work, Elias Lönnrot, comes to life to begin the film. The story concerns the love between Lemminkainen (Andris Oshin), a soldier and woodcutter and Annikki (Eve Kivi), a lovely young maiden. For their impending nuptials, Annikki's brother Ilmarinen (Ivan Voronov), the village blacksmith, undertakes to build the magical Sampo, a forged machine that will bring good fortune to the village, along with grain, salt and gold (think a metallic Horn of Plenty).

Someone else has been trying in vain to build a Sampo: the witch Louhi (Anna Orochko) - she has had her wizened gnomes work her forge day and night to produce a Sampo, all to no avail. Frustrated and on the point of putting her lead blacksmith to death, she uses her magic and finds out Ilmarinen is the only one who knows the proper procedure for making the machine. Watching him and the lovely Annikki, Louhi hears of Ilmarinen's plans and makes plans of her own. When Annikki sits at the dock in the family boat, Louhi flings her black cloak across the sea, which speedily goes to Annikki and turns into the sail of her ship, kidnapping the young maiden and bringing her to the witch's clutches.

Lemminkainen and Ilmarinen go to her rescue. How? By cutting down an oak tree and carving it into a rescue craft. Yes, it WOULD have been simpler to just ... oh, BORROW somebody else's boat, but that's not how REAL heroes do these things! :) By the way, if ever there was a film where trees were an endangered species, this is that film. Between the opening shots of Lemminkainen and his friends cutting down a HUGE swath of trees, this boat-making scene and the finale, NO tree is safe in Finland!

Our heroes arrive on Louhi's island to rescue Annikki. She tells them they can have the girl, if they both promise to undertake one task for her in return. They agree, and Lemminkainen goes first. The task? He must plow a field of deadly snakes. Ilmarinen comes to his future brother-in-law's rescue by forging him a bronze horse. When the field is plowed, Louhi turns to Ilmarinen and demands his task ... yep, you guessed it. Build HER a Sampo! The problem: he can only make the magical machine ONCE - if he makes it for the witch, then his family and village will suffer. But Louhi will not accept any other gift, so he proceeds (with the help of her gnomes at the forge) to build it.

Looking like the world's biggest new age crystal (see picture at left), the Sampo cranks out the goods (grain, salt, gold, etc.) and Louhi releases Annikki. Annikki has a tale to tell the men: Louhi not only had her a prisoner in her cave, she has also imprisoned the Winds! They are kept chained in giant bladders, slaves to Louhi's will. This gives Lemminkainen an idea.

Ilmarinen returns to Louhi's forge one final time, bringing forth a magical steel boat to carry the three of them home. With the Sampo at her control, Louhi has no lost all interest in her captives and they sail away.

Upon seeing Annikki safely ashore back at their village, Lemminkainen does what any good hero would do: jumps BACK into the sea and SWIMS back to Louhi's island. It's been eating at him the whole trip that the witch should have THEIR Sampo and he is determined to get it back. Arriving at her island, Lemminkainen sneaks into the cave and releases one of the winds (in the form of a mist) that blocks out Louhi's sight. With the mist so thick, he steals the Sampo (and her boat) and sails back towards home.

Louhi disperses the mist and sees Lemminkainen on the sea. She releases the North Wind as a gale to crush the boat and drown the hero. The boat does capsize, taking the Sampo with it. In one of the coolest parts of the film, Lemminkainen's mother stands on the shore, watching and waiting for her son's return. She begs news from the trees, from the sky and from the road (which rises up bemoaning its fate, that of people trodding on it day in and day out - see picture at left). It is an effective and astonishing shot that had me smiling the first time I saw this. It also brings home the fact that all the different types of folk magic is second nature to everyone in the Finnish village of Kalevala - yes, Ilmarinen can bring forth the Sampo, but Lemminkainen's mother can call forth the inanimate objects to speak with her, and there are other examples just taken as given throughout the film.

Lemminkainen is eventually fished out of the sea, clutching a small piece of the Sampo (all he was able to recover before it sank). Even though it isn't the whole machine, just the fragment is guaranteed to bring happiness and prosperity to their village. The marriage between Lemminkainen and Annikki proceeds, but Louhi will have none of that, and in her insane rage at losing the Sampo, plays her final card: she steals the Sun out of the sky and imprisons it! Looking suspiciously like a studio floodlight (which it was - another piece of low-budget ingenuity by the filmmakers), the Sun is now held captive in Louhi's cave and the village and its people begin to freeze with the prospect of a never-ending winter (see, it took a while, but we FINALLY got to the reason behind the title of the film!) - the villagers are called together and decide to play THEIR final card: the magical kantele.

It has been a long-standing rule at Conjure Cinema (from the very beginning, actually) that the features we show cover some aspect of magic (hence our name). As a result, this has lead me on a two-decade (and counting) journey through World Cinema from every country and time, searching for the unusual, the rare and the unseen examples of magic in all it's cinematic forms. This is the only example I have seen of word magic (or Words of Power); specifically in this case, Songs of Power. The villagers once again call upon Ilmarinen to forge magical kantleles (the Finnish zither-like instrument seen to the left). Again, trees are sacrificed and all the metal in the village is taken to the forge to make the magical strings. When all is finished, the villagers walk across the frozen sea to Louhi's island to rescue the Sun. Louhi and her gnomes come out for battle, but the gnomes are so entranced by the sweet, bell-like tones of the kantele they fall asleep, and Louhi is turned into a pillar of salt from the music (!). The Sun is released back into the sky, the world warms again and the marriage (finally) proceeds.

SAMPO has been released in different versions: as the American-International cut-down, redubbed version THE DAY THE EARTH FROZE (which I've been discussing above) and as an episode of Mystery Science Theater 3000. Sadly, the original release of the film is unavailable (and long-overdue). Now, if you'll excuse me, I must attend to my forge ... I've got some grain and salt and gold to produce ...

Next Time: Keep watching the skies! I'll tell you all about our fourth Annual U.F.O. Party, where I pulled out all the stops with a showing of the very first documentary ever made about Flying Saucers and the return of a "certain someone" that actually made one of our viewers cry! :) It's all next time here at Conjure Cinema!
Posted by Conjure Cinema Curator at 7:45 AM 1 comment: