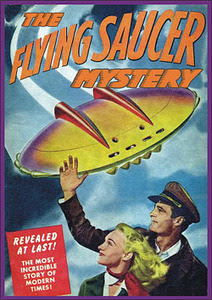 August of 1993 featured our annual Conjure Cinema UFO Party and, knowing it was to soon be upon us, I had spent the better part of the year searching for what is considered to be the very first UFO documentary. The modern UFO era is generally believed to have begun with Kenneth Arnold's widely-reported sighting of nine UFOs over Mt. Rainier, Washington, on June 24th, 1947. While being interviewed by reporters, the United Press quoted Arnold as saying, "They were shaped like saucers and were so thin I could barely see them...", and so the term 'flying saucers' was born.

Three years later, the first documentary on these phenomena was released. Running less that 15 minutes, THE FLYING SAUCER MYSTERY covers a lot of ground for its length.  After Arnold's original sighting, the floodgates were opened and other witnesses came forth with photos, videos and some truly bizarre stories (with none stranger in the early days than George Adamski and his contactee tales of traveling around to the different planets with the crews of the saucers!) - the documentary shows recent photo and video footage, all the while purporting some of the current theories of what the UFOs could possibly be. It also includes interviews with authors Frank Scully and (one of the most famous of the early writers on the subject) Major Donald Keyhoe. 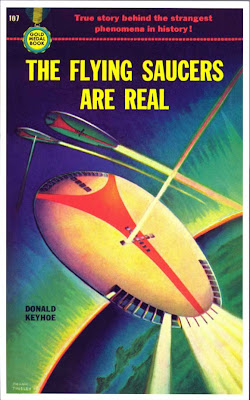 Keyhoe's breakthrough article, entitled "The Flying Saucers Are Real", was originally published in the January, 1950 issue of TRUE magazine and proved so popular and talked-about he expanded it into what is considered the first serious look at the phenomena (Keyhoe is seen in the documentary holding a copy of the book seen at left). It was followed up by more books and articles on the subject.

When I tracked the documentary down (via Sinister Cinema), it came with about 30 minutes of different 'flying saucer' trailers to expand the length of the tape, showcasing such films as THE FLYING SAUCER, U.F.O. and Ray Harryhausen's opus EARTH VS. THE FLYING SAUCERS. But this still made for a very short running time for our show ... what to do?

Sheerly by chance, I looked up my old buddies at the Unarius Academy of Science (see my blog entry for September 1st, 2009) and lo and behold, they were offering a SEQUEL to their jaw-dropping UFO feature THE ARRIVAL! So quick as a speeding saucer, I ordered THE ARRIVAL, Part Two (aka ROOTS OF THE EARTHMAN) ... and proceeded to regret it. Sadly NOT capturing lightning in a bottle twice, Part 2 has none of the charm of the original ARRIVAL, nor the cheesy effects ... turns out it doesn't even have a SCRIPT (I am not making that up)! The folks at Unarius claimed that their 'actors' were channeling their past lives through 'psychodrama' and re-living their contacts with the Space Brothers, exactly as it happened so many millennia ago ... in a washed-out gully ... with their Texas accents.

Half as funny and unfortunately twice as long as the original, this film is notorious in Conjure Cinema's history as being the only film to make a viewer cry! I introduced the film, let it run and at the end of the tape brought the lights up to a semi-stunned crowd (who were berating it throughout), and told them the bad news: that was only Tape 1 of 2! Whereupon one of our viewers burst into tears, saying, "It's just SO bad!"

Bravely sitting through Part 2 (although it didn't get better) was a tough slog, but one that you felt you could wear with a badge of, if not honor, then pride that you had survived it! :) The lights came up, our battered but never beaten audience gave each other the look of a shared painful experience and went into the night, sadder if not wiser ... well, definitely sadder!

Before I close out this entry, in case you're mourning the fact that you weren't there with us, not to worry: here's the entire documentary for your viewing pleasure!

And because you need to see it, here's a taste of the original Unarius film (plus the opportunity to order the DVD!) ... scroll down and see the clip! Enjoy!


Next Time: Back to Earth and the epic 1956 Russian fantasy ILYA MUROMETS or, as it was known in America, THE SWORD AND THE DRAGON! Strap on your armor and join us!
Posted by Conjure Cinema Curator at 11:42 AM No comments: