Sir Henry Rider Haggard wrote the original novel of SHE in 1886. The story so caught the public's attention that it was filmed repeatedly, beginning in the silent era of films (usually short one-reelers dealing with the ending of the book). The first feature-length version of the story was filmed in 1925, starring Betty Blythe, followed ten years later by Merian Cooper's version (set not in the vast African wasteland, but CANADA of all places!) and starring Helen Gahagan and Randolph Scott. Cooper had a lot of credibility and backing from his studio (RKO), thanks to the success of KING KONG in 1933. As a result, his version of the tale is full of sumptuous sets and a thrilling score by Max Steiner (also of KONG fame). 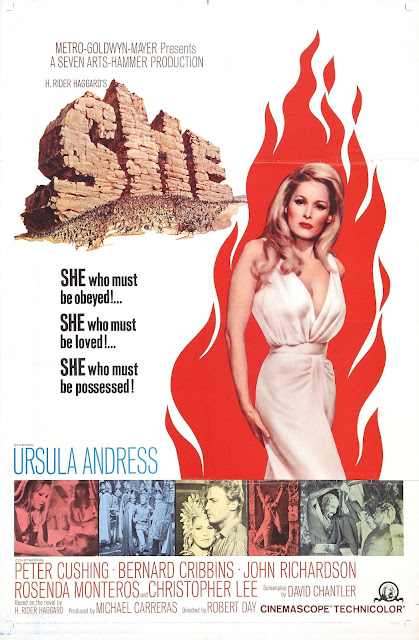 The property would sit dormant for another thirty years until 1965, when Hammer Films would take their crack at it and create a minor masterpiece of fantasy film making. The basic story concerns Ayesha (Ursula Andress), 'She-Who-Must-Be-Obeyed', an immortal woman who rules the long-forgotten kingdom of Kor (renamed Kuma in this version) and awaits the reincarnation and return of her lover Kallikrates (John Richardson), whom she slew in a jealous rage two thousand years ago. She is immortal for having bathed in the Flame of Life and over the centuries has mastered many a magical art. Fast forward to present times and an expedition being led by Leo Vincey (also Richardson) and his mentor and guardian Horace Holly (Peter Cushing) to find the lost city.

After being attacked and almost killed by a savage tribe called the Amahaggar, they are saved by Ayesha's loyal servants. The leaders of the attack are brought before Ayesha to be judged and summarily executed. Leo is tended by a native girl, Ustane (Rosenda Monteros, left), who falls in love with him.  Ayesha entrances Leo, who quickly falls in love with her, even though he still has feelings for Ustane. Although he is told to choose between the two women, Ayesha has Ustane put to death (via a handy cage and lava pit) - Leo is outraged and makes a move to kill Ayesha in return for this act, but the poor sap is so far gone in love that he's powerless to do anything.

Upon hearing of his daughter's execution, her father Haumeid (Andre Morell) leads the Amahagger tribe in revolt. Their superior numbers overwhelm Ayesha's army and the battle is lost. Ayesha, however, is long gone ... to the secret cavern which contains the Flame of Life, along with Leo and Holly. The final fly in the ointment is Ayesha's High Priest Bilali (Christopher Lee), who has served Ayesha faithfully for decades and feels that immortality should be his, instead. A climactic fight breaks out between him and Leo, with Bilali getting the upper hand and rushing towards the flame ... only to get a spear in the back courtesy of Ayesha. Seems magic wasn't the ONLY thing she practiced for two thousand years! The final impediment dealt with, SHE takes Leo by the hand and walks with him into the flames. Leo is bathed in the Flames and becomes immortal, but Ayesha learns too late that you can only enter the Flames ONCE - to enter a second time is to lose your immortality. Holly has witnessed it all and leaves his now-immortal companion beside the Flames ...to begin HIS vigil of waiting, perhaps centuries, for Ayesha's return. 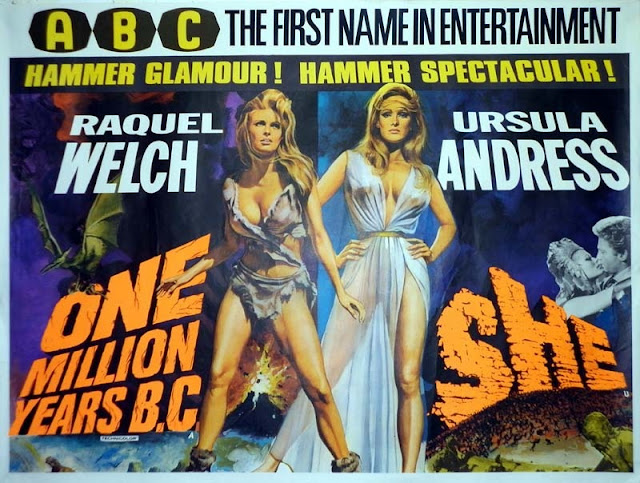 SHE has always been one of my favorite books - many people don't realize it is only one in a series of books that Haggard wrote about his most popular character (the others being AYESHA, THE RETURN OF SHE, SHE AND ALLAN and WISDOM'S DAUGHTER). While the changes from book to film are many and numerous, this is far and away my favorite film adaptation of the novel. Hammer spent a lavish sum to make this one of their 'A-list' efforts and it shows in every frame. The film was a huge hit upon its release, and would make even more money the following year as half of a double feature release with the Raquel Welch/Ray Harryhausen feature ONE MILLION YEARS B.C.
The parching, sun-baked desert and the lost city of Kuma/Kor, the beauteous Ayesha and the Flames of Life all gave my snowbound audience surcease from thinking about winter in New England, if only for a few hours. The film is available on DVD, should you wish to own your own copy. Settle down, turn out the lights, sit back in your cosy room and relax ... but think twice before you decide to warm yourself beside the fire!
NEXT TIME: We take a SECOND crack at 1948's THE LUCK OF THE IRISH, and this time the Wee Folk are a-smilin' on us! Join us, won't you?
Posted by Conjure Cinema Curator at 12:14 PM No comments: