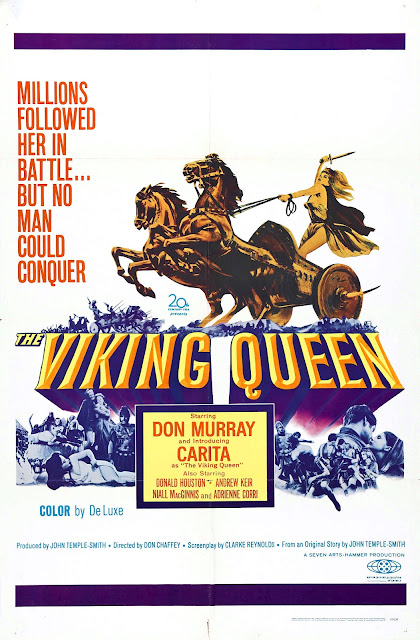 Ah, Spring! The Sun returns, the flowers are in bloom and a young man's fancy turns to thoughts of ... bladed chariots of death??? Well, they did for me during the Spring of 1993. If you look at my previous posting, you see we showed DR. STRANGE in February. I was now on a roll and decided our March show would be one of my favorite classic fantasies, 1948's THE LUCK OF THE IRISH, about an American reporter meeting an Irish leprechaun and the Celtic confusion that followed. The Wee Folk had other ideas, however, and (taking a page from the name of our show) did a little conjuring of their own and smashed us silly with the Blizzard of '93, aka "The Storm of the Century" {which you can read more about here: http://en.wikipedia.org/wiki/1993_Storm_of_the_Century}

Under the circumstances, I had no choice but to admit defeat and cancel our March show, saving LUCK for the next year. Instead, I turned my sights to April and
our next feature, THE VIKING QUEEN. This was another 16mm print from the estate sale collection (see my June, 1991 entry) I had liquidated, and one I had neither seen nor heard of before. I sat down one evening to grade this (condition, color, etc.) and as it unspooled, a slow and steady grin covered my face. I knew I had found another gem for Conjure Cinema! If PREHISTORIC WOMEN (see my January, 1993 entry) hadn't already claimed the title of Silliest Film of All Time, this would be a very close second! It does deserve some honorific, though ... Goofiest, Cheesiest, hmmm ... got it - Most Historically Muddled! Don't believe me? Well, go see for yourself - take a look at the trailer ... no, it's all right, I'll wait: http://www.youtube.com/watch?v=TtNp2BkObV4

Based V E R Y loosely on the legend of Boudica/Boadicea (see the Wikipedia entry here: http://en.wikipedia.org/wiki/Boudicea), it starred the lovely and talen ... umm, lovely and enthusias ... hmm ... OK, the LOVELY Finnish model Carita (in her only screen role) as Queen Salina, the Viking Queen of the title - except she's not a Viking! As a matter of fact, there are NO Vikings in the film! As a fellow reviewer posted, why wasn't the film called THE CELTIC QUEEN? Guess it wasn't catchy enough!

Anyway ... Salina is made Queen after her father's passing and now has to find a way to co-exist with the Roman legions who have conquered the land. She has fallen in love with the Roman General-Governor Justinian (Don Murray), and he with her, so one would think this would be the end to both their problems, right? Wrong! There's always a fly in the ointment in films of this type (else you would have NO conflict), and it comes in the form of Justinian's second-in-command Octavian (Andrew Keir, last seen as Prof. Quatermass in our December, 1991 showing of FIVE MILLION YEARS TO EARTH).

Keir is EASILY the best thing about this film. You readily believe that here is a Roman soldier who's sick of being in this backward, foreign country; who wants nothing more than to get home and back to civilization and, barring that, is willing to take what he can get while he's stuck here, be it wine, women or treasure. God help anyone who gets in his way, including his commander. Octavian sees Justinian's love of Salina as a form of weakness, and plots his downfall, as well.

Speaking of Gods, another Big Bit of Weirdness in this film takes place when Salina's father is being buried by the Druid priests, they are all chanting paeans to Zeus ... ZEUS? DRUIDS? REALLY? Oh, yes ... it's in there and it's a head shaker! But that's STILL not the oddest thing about this film ...

The REALLY strange part (seen briefly at the 1:00 mark in the trailer above) is the casting of Nita Lorraine as the "Nubian Girl Slave" - all well and good, except for the fact that she's a WHITE woman in pretty obvious makeup! Really, Hammer??? You couldn't find ONE BLACK ACTRESS in all of England to be in your film ??? It's a small, throwaway part, but still unsettling, nonetheless. See for yourself: http://www.aveleyman.com/ActorCredit.aspx?ActorID=26741

There is also an apocryphal story attached to this film that during a battle scene that one of the soldiers is seen wearing a wristwatch - this may have sprung up as an offshoot of the 1960 Kirk Douglas film SPARTACUS, where not only can slaves and soldiers be seen wearing wristwatches, but Tony Curtis' character Antonius can be seen sporting a rather spiffy Rolex, as well!

Getting back to the plot - the Druids are against Salina and Justinian's romance and start killing off Roman soldiers in the Sacrificial Druid Pit (TM), sending Justinian and his troops out to quell the uprising. While he's gone, Octavian decides it's payback time for the Viking Queen and her followers and drags Salina out in front of everyone for a good old-fashioned whipping! Justinian, upon his return, hears what has happened and goes off to try and stem the growing tide of revolt. He is far too late, as Salina has taken up armor and called forth her people to attack - as she tells him, "This is not the dream we made, my darling." The final battle takes place, Octavian gets his (YAY!) and Salina (rather surprisingly) dies, as well - no happy ending for our star-crossed lovers here!

So it all comes down to one question: can I recommend you watch this? It doesn't fall into the same 'guilty pleasure' category that PREHISTORIC WOMEN or some other of our previously-reviewed titles do, and while Carita is beautiful eye candy, her emoting makes you feel like YOU are the one being whipped ... I'd say yes, but only if you're in the right mood for it. If Andrew Keir weren't in it as the film's saving grace, then probably not. If you are looking for a do-it-yourself home version of MST3K, though, this is indeed your film (as my audience proved by rising to the occasion). It is available on DVD as a double feature with THE VENGEANCE OF SHE (a future blog entry).

Next Time: Conjure Cinema breaks out the silly glasses and presents it's FIRST 3-D feature, the 1961 Aztec-sacrifice/Canadian screamfest THE MASK! "Put The Mask On NOW" !!!
Posted by Conjure Cinema Curator at 3:13 AM