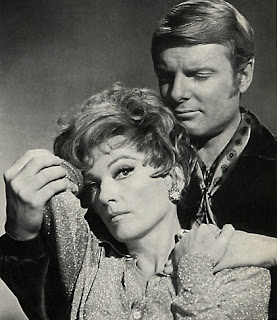 With the success of FEAR NO EVIL (see my previous entry), Universal ordered a second pilot film for BEDEVILED, bringing back Louis Jourdan's Dr. David Sorrell character, a psychiatrist who deals in cases of the occult, and Wilfrid Hyde-White as his mentor and teacher Harry Snowden. The case this time involves a former patient of Sorrell's, Aline Wiley (Carla Borelli), an heiress who has committed suicide, and who was involved with a cult of devil worshippers. Her mother (Anne Baxter) (pictured) insists she's being haunted by Aline, her new husband (John McMartin) (also pictured) thinks it's all nonsense, and younger sister Loey (Belinda Montgomery) may be the next victim.

Before I go any further, let me say a word or two about Belinda ... she was one half of a one-two punch to the gut of the WORST child actors Hollywood has ever crapped out. The ONLY child actor worse than her was her younger brother of 11 years, Lee Montgomery, who would sometimes be billed as Lee H. Montgomery or Lee Harcourt Montgomery. The two of them were the "go-to kids" for many horror films and TV shows, and stank up a LOT of celluloid. Lee's biggest hit was the ratfest BEN (the sequel to WILLARD), while Belinda was in this and had the title role in another TVM from 1973, THE DEVIL'S DAUGHTER. She almost single-handedly sinks this film with her cloying performance as Loey.

To be fair, she's not completely to blame. Anne Baxter gives such an eccentric, over-the-top performance in this, at times you think she channeling Gloria Swanson in SUNSET BOULVEVARD-LITE. From the opening frames where she's wandering the grounds calling for Aline, to the whole ludicrous "did we kill a German Shepherd or did we kill a wandering hippie who Saw Too Much?" subplot, there's more than enough bad acting to go around. McMartin is not much better, as the boozehound stepfather in denial over any shady goings-on, and trying to get "friendly" with Loey --- the whole character is creepy. I can understand his trying to send her FedEx to Satan ASAP, just to get that annoying whining voice out of his head if nothing else, but still ...

Nature (thankfully) abhors a vacuum, though, and just as there are bad performers in this film, there are also two excellent performances. Georg Stanford Brown co-stars as Larry Richmond, a Vietnam vet and musician who has partied with Aline and has (perhaps) learned too much, and must be silenced by the cult. Far and above everyone else in the film (except Jourdan, of course) is Diana Hyland's character of Leila Barton, a love interest for Sorrell and also the main manipulator of the film.

With her Satanic powers, a leering statue of Pan (subbing in for the Infernal One) whose eyes glow when she makes her Death Spell, some black candles and a picture of the victim, she goes to town, killing off cast members one by one in various picturesque ways. Larry gets his out by the seaside in his rented house, as well as others, until finally Loey is in line as the next sacrifice.

Sorrell figures it out, and confronts Leila - in a refreshing touch, she not only admits her guilt, but tells him blatantly there's no way he can stop her, using her seductive wiles to try and make him her lover and consort, instead. He leaves to try and save Loey, just as Leila pulls out the statue, the candles ... and a picture of Sorrell. As he's driving on the busy freeway, he becomes disoriented - Leila is using her powers to make his death look like an accident. Sorrell is made of stronger stuff, however, and manages to overcome her spell and save Loey, exposing the cult at the same time.

Rushing back to Leila's apartment for one final confrontation and to put a stop to her killings, Sorrell finds it completely empty - the sorceress has gotten away completely, with her words ringing in his ears of how they could have been great together ... "another time, my love" ... setting up her character's possible return if the show had gotten the greenlight to go to series.

The music (again by Billy Goldenberg) is highly reminiscent of the themes used in FEAR NO EVIL, heavily borrowing the sonic tone and mood of the first film. Sadly, editor Byron Chudnow did not return for the sequel, as it could have used his master touch. The film commits the gravest sin (no pun intended) for a horror film, feature or TV-wise: it's just plain not scary. It tries (BOY, does it try), but it never achieves more than an unsettling mood in places, and that's just not enough. This was borne out by the low ratings it received upon its initial airing, and was the final nail in BEDEVILED's coffin (sorry!) for it to be picked up as a series. As it stands now, it's an interesting occult footnote.

Next Time: A lovely witch, her snarky brother and the slinky Pyewacket put a spell on James Stewart in the all-star BELL, BOOK AND CANDLE!
Posted by Conjure Cinema Curator at 11:04 AM