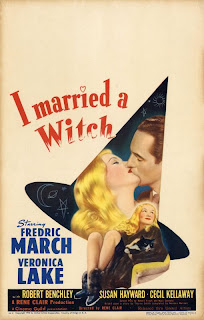 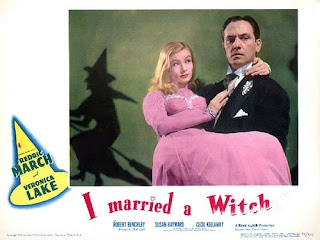 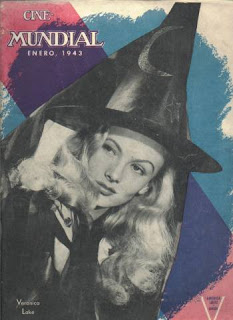 THE PASSIONATE WITCH, when optioned and made into a film, had its name changed to I MARRIED A WITCH (a more audience-friendly title). Directed by Rene' Clair, it starred the lovely Veronica Lake (pictured above), she of the famous peek-a-boo haircut, and Fredric March, who has the distinction of being the only actor to win the Academy Award for a "monster" role (in 1931's DR. JEKYLL AND MR. HYDE).

The basic plot concerns the Wooley family - 1672: New England Puritan Jonathan Wooley (March) has two witches, Jennifer (Lake) and her father Daniel (Cecil Kellaway) burned at the stake, but not before she places a curse on him and all his descendants that they will all marry the 'wrong woman', thus making their lives a living Hell. One quick montage of marital grief later, and we come upon our current protagonist, Wallace Wooley (also March).

1942: Wallace Wooley is campaigning for Governor of the state; as such, he can't afford even the hint of scandal. After a fund-raising speaking engagement at a downtown hotel, the spirits (in smoke form) of Jennifer and Daniel arrive, to continue the torment of the latest Wooley scion. Setting the hotel ablaze, they force its evacuation, but not before Wallace catches a glimpse of a woman left behind. Gallant to the last, he rushes back in to save the woman, which turns out to be a completely nude Jennifer. He stumbles back outside, vivacious blonde wrapped in his coat, to the accompaniment of photographer's flashbulbs, front-page headlines and many a comment about "manly" Wallace (nudge, nudge, wink, wink!).

All of this does NOT sit well with Wallace's fiancee' Estelle Masterson (Susan Hayward), a shrewish woman whose marriage is one more of political convenience than love ... that would be curse enough for any man, but Jennifer wants her revenge on the latest Wooley, and is enjoying her new-found body after 300 years of being a spirit. She decides to slip him a love potion, so he'll go crazy with desire for her on the eve of his wedding and be miserable the rest of his life. As it happens, however, Jennifer drinks the potion by mistake, falling head over heels in love with Wallace, and determined to make him hers.

Now begins the comedy of errors that Thorne Smith was best known for: Daniel, Jennifer's father, is dead set against her marrying a mortal and is doing everything he can to sabotage it; Jennifer is throwing herself at Wallace, literally and figuratively; Estelle is trying to get out of the marriage any way she can, but is being forced into going through with it; and Wallace is getting more and more crazed trying to keep everything under control before his political ship hits the reefs and founders.

The scene at the wedding is one of the comedy highlights of the film, as Jennifer is determined to stop Wallace's marriage at any cost: from high winds inside the church that sends candles sputtering and people flying, to the many and varied ways of stopping the church singer from starting her song "I Love You Truly" to get the bride down the aisle. It's one of those great moments in film that get funnier and funnier the more times it goes wrong; you'll never hear that song without laughing after this.

More witchy hijinks ensue and the wedding is called off. Wallace is a ruined man, and Jennifer truly DOES fall in love with him - she and Daniel then turn their magic to getting him elected (in another silly montage, with even his political opponents endorsing Wooley for candidacy), and Jennifer and Wallace are married. The film ends with a nice bit, looking in on the Wooleys and their family: while Jennifer is behaving, her daughter comes galloping in on a broomstick, a chip off the old block ... and you just KNOW life is going to be anything but quiet for Governor Wooley.

A big hit at the time of its release, I MARRIED A WITCH had more than its share of problems behind the cameras, mainly (according to the various reports of the time) due to the diva-like antics of Veronica Lake. She disliked Fredric March so much, she would pull malicious tricks on him, like eating garlic before their kissing scenes, or wearing a 40-pound weight under her nightgown for the repeated takes of March carrrying her (see lobby card above). He became so disgusted with her he nicknamed the film "I Married A Bitch".

Like or dislike her, Lake does carry the movie - her malicious witch having her tables turned on her and her lovelorn pining are quite cute, and Lake is an accomplished comic actress. The film has always been considered the basis for the television series BEWITCHED - although the TV producers denied it, by comparing the two, it's pretty obvious that is the case. It is also the precursor to 1958's BELL, BOOK AND CANDLE, which we'll cover in a later edition of this blog. As of this writing, I MARRIED A WITCH is not available on DVD, but it does show up on Turner Classic Movies quite often, so keep your eyes peeled for it - it's worth a look!

Next Time: "Occult investigator" David Sorell returns in the sequel to the TVM FEAR NO EVIL to battle a witch on a killing streak and a very naughty statue of Pan in RITUAL OF EVIL!
Posted by Conjure Cinema Curator at 6:17 AM