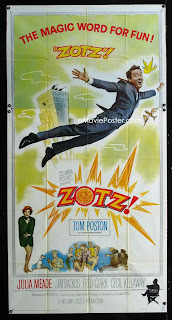 Director William Castle (1914 - 1977) made his mark in Hollywood as the master of the "gimmick" film, with movies such as THE TINGLER (1959), in which certain seats in movie theaters were wired up to a vibrating buzzer to simulate 'The Tingler' when it got loose in the theater, or HOUSE ON HAUNTED HILL (1959), filmed in 'Emergo' ... which turned out to be a plastic skeleton on a string that popped out of a box in the front of the theater and swooped over the audience to the back, at a certain time in the film. Only problem was, said skeleton half the time got stuck, and the other half was pelted with popcorn, popcorn boxes, soda cups, etc., by teenage boys and their friends on repeat viewings. It didn't matter to Castle, however; the ticket sales were brisk and the gimmicks were great word-of-mouth business.

Fast forward to 1962 and one of Castle's lesser efforts - ZOTZ! Based on the novel by Walter Karig, it tells the tale of Professor Jonathan Jones (Tom Poston), whose niece acquires what she believes to be a kooky new charm for her charm bracelet from her archaeology student boyfriend. In actuality, it's a magic amulet of the Great God ZOTZ, and it still packs a wallop. Jones and fellow professor Virginia Fenster (Julia Meade), who are both experts in ancient languages, are able to decipher the hieroglyphs on the amulet, and discover its powers. When holding the amulet, and pointing at a living being, it causes intense pain ... add Zotz's name to the equation, and certain death occurs. When JUST calling out the God's name with the amulet in one's possession, it causes all around the possessor to slow to a crawl.

Hilarity ensues when Jones decides to show off his new-found powers to the Dean of the University (Cecil Kellaway) at a faculty party, with a cageful of mice - unfortunately, his niece has clipped the amulet back on her charm bracelet and is taking a ride around town, debilitating the general populace as she goes by.

Retrieving the amulet before it does any more harm, Professor Jones takes it to Washington to turn it over to the military for a weapon - he's dismissed as a crackpot, but a crooked Russian window washer (really!) sees his demonstration and want the amulet for the USSR. The climax of the film finds Professor Jones (ancestor to Indiana, perhaps?) facing off against the Russians on the roof of a tall building. They shoot him, but he slows the bullet down and easily evades it, then jumps off the high-rise to plummet to certain death - only to call out "ZOTZ!" and float to safety to the street below. It ends with the magic ZOTZ amulet lost down the sewer drain, never to return ... ???

This was one of my favorite films when I was a young child, and we used to see it at least once a year at my school. The effects are crude today, of course, but it's still a cute fantasy for young and old. Here's the best part: remember at the beginning of the article when I mentioned Castle's reputation for gimmicks? Well, ZOTZ! was no exception - all the kids who went to see it in the theater got their OWN plastic 'gold' ZOTZ! coin, which they instantly put to good (or bad) use after the movie, pointing at each other and out-'Zotz'-ing themselves all over the country. My friend Paul swears he still has his ZOTZ! coin, and they still pop up from time to time - here's what it looked like:

It was also the only movie I can recall where Castle also brought the Columbia 'torch-lady' logo to life at the opening and closing of the film - she even speaks! For some reason, that always sent a thrill of uneasiness through me! :) If you'd like to experience ZOTZ! for yourself, you're in luck - it comes out October 20th on DVD as part of the William Castle Collection ... so pick it up, or else ... ZOTZ!

Next Time: To the land of the Djinn we go for the first of three DIFFERENT showings of THE THIEF OF BAGHDAD!
Posted by Conjure Cinema Curator at 11:15 AM