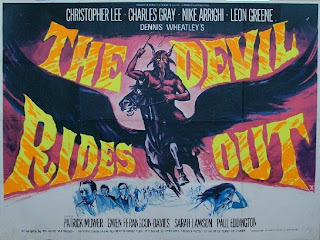 During the 1950s and '60s, Dennis Wheatley was one of the most widely-read and best-selling authors in the English language ... today, he is all but forgotten. He wrote a series of occult/black magic thrillers with such titles as The Haunting of Toby Jugg, The Ka of Gifford Hillary, and They Used Dark Forces. Arguably his most famous fictional character was the Duc de Richleau, a British noble, soldier of fortune, and occult authority, who battles the Devil in all his forms.

Christopher Lee knew Wheatley and prevailed upon him for the rights to make a film of his best novel, The Devil Rides Out, with Lee himself to play de Richleau (in one of the few non-villainous roles of his career). Hammer Films was a perfect choice to host this diabolical tale, and they pulled out all the stops, with effects ranging from hypnotic demons, giant spiders, magic circles, and the appearance in the flesh of "The Goat of Mendes ... the Devil Himself!"

Charles Gray plays Mocata, leader of the Devil cult that de Richleau and his friends battle (in a part which Wheatley based on the life and legend of Aleister Crowley). This would be the third time a role based on Crowley would be put to film: the occultist was also used as the villain in 1926's THE MAGICIAN (where he would be billed as 'Oliver Haddo' and be played by Paul Wegener) and 1934's THE BLACK CAT (where he would be billed as 'Hjalmar Poelzig' and be played by Boris Karloff). While all three performances are impressive, Gray's is the most underplayed and commanding, at one point stopping a knife attack to the chest by staring down his attacker (seen in the trailer to the film: http://www.youtube.com/watch?v=zcp1e4gNKIc).

While a modest success at the time, it did not do well enough to spawn the series of Wheatley films that Lee had hoped for, with Hammer adapting only two other Wheatley novels, 1968's THE LOST CONTINENT (based on Wheatley's UNCHARTED SEAS), and 1976's TO THE DEVIL ... A DAUGHTER (based on the novel of the same name). Interestingly, Christopher Lee has stated recently that THE DEVIL'S BRIDE was one of his favorite film roles, and he would like to see the film redone, with the new special effects available today, and himself repeating the role of de Richleau as an older man, the way Wheatley originally wrote him. I would like to see that, as well. Until then, we have this fine adaptation which comes with my highest recommendation.

Next Time: We hop, skip and slither our way to Bram Stoker's LAIR OF THE WHITE WORM!
Posted by Conjure Cinema Curator at 8:09 AM