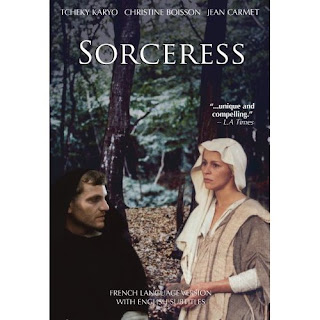 The first of our foreign films shown at Conjure Cinema was also the best. SORCERESS (as it was known in America) came in under the radar, playing in art house theaters and slowly and surely gaining a sleeper reputation by word of mouth. I first heard about the film this way, being highly recommended to me by a friend of mine, and by a happy piece of synchronicity, we happened to get it in on video at my office.

I took the film home to view it, and was blown away. This was EXACTLY the kind of thing I was looking for, something few people had seen, that would resonate with a new audience who would hopefully spread the word about it.

The story takes place in 13th Century France, and concerns Etienne de Bourbon (Tcheky Karyo), a Dominican friar and religious zealot on the hunt for witches and heretics. Arriving at a small French village, he is enraged to find a young 'wise woman' Elda (Christine Boisson) who the villagers come to for herbal cures and folk remedies for their illnesses, all with the seeming blessing of the local priest.

As the friar and the 'sorceress' exchange views on the ways of the world and what constitutes Divinity, he develops a grudging admiration for her, and must weigh this against his sacred duty of exterminating those who have 'turned against God'. The film is a gentle, yet suspenseful, tale of two people trying to get each other to see, if not the other's views, then a common ground. One is more and more worried as the film progresses that the lovely and wise Elda is NOT going to make it to the final reel.

The film was written by Pamela Berger, a Boston College medieval scholar, and directed by Suzanne Schiffman. Here's the kicker: Pamela developed the scenario from the writings of the REAL Etienne de Bourbon and his discovery of the shrine of St. Guinefort ... a holy greyhound.
For more on the original story and legend, may I recommend the wonderful Green Canticle website:

SORCERESS was a BIG hit at Conjure Cinema, and achieved exactly what I had hoped: more word of mouth for a wonderful film, and a testing of the waters for the (occasional) classy/arthouse title. Track this one down if you haven't seen it - you won't be sorry.

Next Time: Back we go to more "Earthly" pursuits - FIVE MILLION YEARS TO EARTH, to be precise!
Posted by Conjure Cinema Curator at 7:39 AM