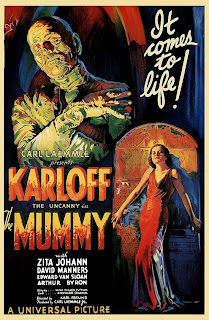 Ah, there you are! Welcome back ... I'll be with you in a moment, I'm just looking for a certain ... now where did I put ...? THERE it is! What's that? Letter? No, my friend, this isn't a letter, it's a very particular Scroll ... here, have a seat and let me read it to you ... then again, maybe I shouldn't. I still remember what happened to poor Norton, back in the day with the Whemple expedition, when he read it - completely mad, they said, until the day of his death. Well, we won't read ALL of it, just the beginning. Are you ready?

"This is The Scroll of Thoth. Herein are set down the magic words by which Isis raised Osiris from the dead. Oh! Amon-Ra -- Oh! God of Gods! -- Death is but the doorway to new life --- We live today - we shall live again -- In many forms shall we return - Oh, mighty one."

These words set the tone and open 1932's THE MUMMY, the first in a very successful film series for Universal Studios, as were their Frankenstein and Dracula series. In an interesting sidenote, both THE MUMMY and DRACULA open to the strains of Swan Lake - it would take Max Steiner's wonderful score to 1933's KING KONG to get the ball rolling with synchronous music scored to the action on the screen, instead of library cues.

THE MUMMY was Boris Karloff's fantastic follow-up to his role as the Monster in 1931's FRANKENSTEIN. As with that film, he once again had to undergo hours of makeup preparation with master makeup artist Jack Pierce, with amazing results. In many ways, this film was probably harder for him, as he was actually portraying three characters: the High Priest Im-Ho-Tep (in the flashback scenes of Ancient Egypt); the accursed titular immortal Mummy, thousands of years old when discovered by the Whemple expedition at the beginning of the film; and (after being brought back to life), Ardath Bey, the 'expert' of Ancient Egypt and hidden tomb locations, with a knowledge that no one else has ... at least, no one living.

As I wrote in the Lughnasad 1991 issue of HARVEST: "This film has it all: Egyptian magic, reincarnation, and, of course, the Sacred Scroll of Thoth. This last item is what gets Karloff ... into trouble, as he steals the scroll to resurrect his beloved Princess Anck-es-en-Amon from the dead...

Im-Ho-Tep's punishment for the attempted resurrection is to be mummified and buried alive in a forgotten grave near his beloved Princess (Zita Johann), as her guardian throughout eternity. The scroll is buried with him so that none would repeat his sacrilege ... Im-Ho-Tep is dug up and
one ... young archaeologist (Bramwell Fletcher) translates and reads the scroll aloud (after translating and ignoring the inscription of death to the defilers of the tomb), bringing the mummy back to life. The mummy grabs the scroll and shambles into the desert, leaving behind one very insane young man.

Ten years later, due to his repeated rituals with the scroll, Im-Ho-Tep has achieved a tenuous semblance of life and is able to pass himself off as "Ardath Bey". With his knowledge of ancient Egypt, he leads the latest batch of explorers to the tomb of his beloved. After the coffin of his Princess is safely exhumed and stored in the Cairo Museum, he begins his spells to call her back to him from across the gulfs of Time. His call is subconsciously heard and answered by Helen Grosvenor (Zita Johann, again), daughter of the Governor of the Sudan and the reincarnation of Anck-es-en-Amon. Once they meet, Im-Ho-Tep is unhinged and, overjoyed to find his love again, spends the remainder of the film killing off anyone who gets too close to the truth.

At the climactic ending, he has hypnotically called the young woman to the museum and adorned her in royal raiments. The one catch to her becoming immortal, however, is that she must die first to free her of her current life's memories. This doesn't sit too well with our heroine, who, on the verge of being sacrificed, rushes to a statue of Isis and begs Her for divine mercy. In a marvelous final touch, Isis hears her plea for help ... and raises a glowing ankh, which sets fire to the scroll and sends the mummy crumbling to dust.

THE MUMMY was a HUGE hit when it was shown at Conjure Cinema, probably the largest crowd we had to that time. Part of it, admittedly, may have been sheer January stir-craziness, what with all the snow and freezing temperatures - and the shared warmth of a number of people jammed into a small screening room watching a movie about WARM Egypt ... but the more interesting part to me afterwards was finding out that, although everyone KNEW what "The Mummy" looked like, how very few of them had ever actually SEEN the movie! It was a very pleasant revelation all around, and still holds up well today, so many decades after it's making. It is also (unlike many films described here) available in a number of different DVD editions, so you should have NO trouble tracking it down.

So there you have it, my friend. Ah, unfortunately, it looks like I may have read TOO much of that scroll, after all ... that shuffling sound? No, no, just leaves going by the open window, I'm sure - I'll get up and close it while you wait here ... I (or someone - or some - thing) will be right back ...

Next Time: Explore one of my childhood favorites - get your magic coins ready for ZOTZ!
Posted by Conjure Cinema Curator at 11:25 AM