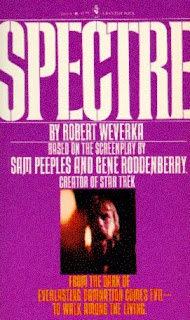 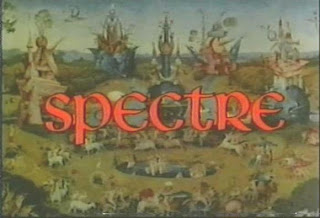 It's a good thing Gene Roddenberry is known as "the father of STAR TREK", for he could just as easily been tagged with "the father of the most failed TV pilots ever made". Consider: during Gene's post-STAR TREK career, he tried to recapture lightning in a bottle with such fare as GENESIS II (1973), THE QUESTOR TAPES (1974), PLANET EARTH (1974), and, when the sci-fi well had dried up, he gave the supernatural a go with SPECTRE.

Of the four, I believe SPECTRE had the best chance to continue as a series, had any of the networks bitten. The pilot's plot concerns occult criminologist William Sebastian (excellently portrayed by Robert Culp) and his long-suffering, reluctant partner in crime, Dr. Ham Hamilton (Gig Young), who gets dragged back in one more time to a case that Sebastian is investigating. Think Holmes and Watson, via Monk and Ham from the DOC SAVAGE pulps (I always wonder if that's where Gene got the name for Gig Young's character). The two have a nice, easy bickering rapport back and forth, and Ham is also Sebastian's physician, watching over him and his worsening heart condition (a hole in his heart that refuses to close or heal) that occurred during an unspecified occult battle in the past.

When the film opens, Sebastian and Ham have been called in to investigate the sordid goings-on at London's Cyon House by the Lady of the House, Anitra Cyon (Ann Bell). She is convinced her older brother, Sir Geoffrey (James Villiers), has gotten in too far with his occult dabbling and is in trouble. Anitra shows up at Sebastian's house, calling off the investigation and offering to pay for their time. Sebastian takes her into the library, and after a few quiet tests, pulls out the Apocraphyl Book of Tobit. Slamming it into her chest, she screams and disintegrates ... and Sebastian's supposition that it was a succubus posing as Anitra is both borne out and a rousing opening to the film.

More diabolical happenings occur on their way to London as the Cyon private jet, piloted by Mitri (Dimitri) Cyon (John Hurt), develops engine trouble over the ocean and goes into a dive. While Ham is frantic, Sebastian takes it all in stride, knowing the demon in charge is playing with them. Upon arriving in London, they drive to see a fellow occultist, Dr. Qualus, who is also investigating the Cyon case, only to arrive slightly after his murder by a demon. While investigating his death in his burning house, Sebastian comes upon Qualus' notes, just as the demon returns. They are protected by standing in the center of Qualus' pentacle, frustrating the demon until the fire department arrives.

Sebastian and Ham proceed to Cyon House, where they meet Sir Geoffrey, a libertine who openly indulges his sexual (and other) appetites. His sister Anitra is a pale, repressed shadow of the earlier succubus, and she begs Sebastian to save both her brothers and break the evil surrounding Cyon House. Upon reading Qualus' notes, Sebastian finds that the trouble began three years before when the Druid's Fire Pit on the Cyon property was excavated. The notes go on to explain that the Pit had originally held in place the demon Asmodeus, who is now free and (supposedly) inhabiting the body of Sir Geoffrey.

As they explore the pit and find one half of the Sacred Seal that held Asmodeus in place for twenty-five centuries, Sebastian puts together a plan for their final showdown. Sending Ham into London to get the elements to forge a golden bullet from a melted-down piece of the Sacred Seal, as well as holy water, they return to the Pit. The bullet is dropped and rolls behind one half of the Pit's door. As they pry it open, they find not only the bullet, but also the mummified body of Mitri, holding the other half of the Sacred Seal. It turns out HE was the one who broke the Seal, and the force of the door exploding outward crushed him to death, leaving Asmodeus free to roam the Earth again, in Mitri's body.

Retrieving the bullet, Sebastian and Ham hide behind pillars just as Asmodeus' coven arrives, carrying the bound Anitra as sacrifice - she is laid upon an altar as Asmodeus/Mitri calls forth Sir Geoffrey to defile her, then kill her. Sir Geoffrey regains his humanity and refuses to perform this final indignity, whereupon Asmodeus calls Sebastian forth, knowing he was there the entire time (he IS a powerful demon, after all!). Sebastian and Ham step forth, while Asmodeus offers Sebastian "a gift - of life", bringing forth the pinned voodoo doll that has debilitated Sebastian for so long. Asmodeus removes the pin, Sebastian's chest wound instantly heals, and Asmodeus asks for one thing in return: that Sebastian complete the sacrifice Lord Geoffrey was not able to do.

Sebastian stands over the sobbing Anitra, then at the last moment, hurls forth the holy water, sending the coven into a frenzy and disrupting the ceremony. He then faces off against Asmodeus, using the two halves of the Sacred Seal to send him back to Hell. Asmodeus fights back until Sebastian fires the golden bullet into him, which changes him into his full, reptilian demon form and, raging and bringing down the entire Pit with him, goes back to the Depths, dragging his coveners (and the reformed Sir Geoffrey) with him.

The coda finds the team back at Sebastian's house, when Anitra arrives to thank them. She has a rare and valuable painting for Sebastian, and something a bit more ... personal ... for Ham. As they step off to the library for privacy, Sebastian reminds Ham where to find the Apocraphyl Book of Tobit, should he need it. As he and his housekeeper Lilith (Majel Barrett) are looking over the painting, the fireplace flares, a howling wind comes from nowhere, and Sebastian sees the glowing "A" of Asmodeus as the signature on the painting! To be continued ...

Sadly, SPECTRE was NOT continued - Roddenberry tried his damnedest (if you'll pardon the pun) to get the pilot to series mode, actively recruiting his Trek fans to spread the word, but all for naught. Just as well, for in a short two years, he would be back in a familiar space (ahem), helming STAR TREK: THE MOTION PICTURE.

Next Time: Our first Thorne Smith fantasy is unspooled, with the feature that inspired television's BEWITCHED, I MARRIED A WITCH!
Posted by Conjure Cinema Curator at 11:02 AM