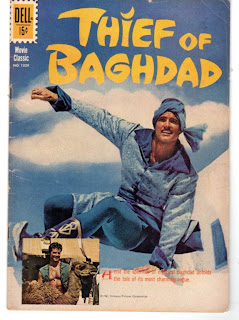 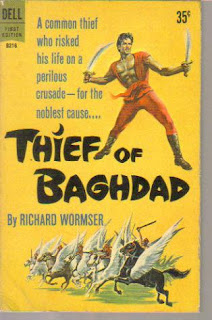 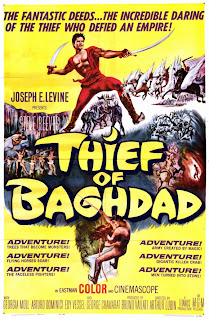 March of 1992 brought more cold and blustery winds, so taking a page from our January showing of THE MUMMY, I scheduled another 'hot' title. I had always wanted to show the 1940 version of THE THIEF OF BAGDAD with Sabu (and yes, that pesky 'H' in BAGDAD/BAGHDAD keeps appearing and disappearing in all the different versions of the film), and was all set to advertise it as the next film, when, lo and behold, I realized that I didn't own it! I thought "What the Hell?" - looking far and wide through my tape collection, I pulled up the one with this title and found it to be the 1961 Italian production with Steve Reeves as Karim, the titular thief.

This is the most light-hearted version of THIEF, and Reeves is quite good in the role. Unlike the silent Douglas Fairbanks version, the 1940 Sabu or the 1978 Roddy McDowell TV version, at no time do you feel Reeves to be in any danger, no matter what new magical threat is tossed his way. He's just so HUGE! :) He was a professional bodybuilder, winning the Mr. Universe championship in 1950, and adroitly parlayed his physique into a screen career, with his most famous role being in the Joseph E. Levine productions of HERCULES (1958) and HERCULES UNCHAINED (1959) - he then went on to portray every type of muscle-bound marvel and peplum protagonist well into the 1960s.

The plot (which has been used and re-used in many variations of subsequent 'Arabian Nights' tales) consists of Karim the Thief seeing and falling in love with the beautiful Princess Amina (Georgia Moll), while passing himself off as her betrothed, Prince Osman (Arturo Dominici). The ruse is discovered, and Prince Osman demands their wedding take place immediately, but Amina has already lost her heart to Karim, prince or no prince.

Karim is shown to be an Arabian Nights-type of Robin Hood, stealing from the rich to aid the poor, and since his heart is in the right place, is aided by a mysterious djinn (Georges Chamarat) to try and win Amina. She has no love for Osman, and despite his threats to raze Baghdad to the ground if he refuses her, has her father announce a contest - whoever can face the many perils and bring back the rare and fabled Blue Rose (which can only be given to her by the one who truly loves her) will win both Amina's hand in marriage and become the new Sultan of Baghdad.

At first, Osman refuses to participate, but being goaded on by the other Princes of adjoining realms, accedes to the contest and decides to show them all. Karim also begs permission to join the quest, but is almost arrested, so he decides to find the Blue Rose without official sanction. Many magical and supernatural perils ensue, including killing trees whose roots choke to death unwary sleepers. Karim had been shadowing the Princes, and arrives to save some of the them from strangulation, while Osman abandons them all, riding off and leaving them to their demise.

The grateful Princes allow Karim to join their ranks, accepting his leadership due to his lifetime of wily practices and survival skills for the challenges to come. They all succumb, one by one, to other perils or are separated from Karim in the end. At last, Karim finds himself in the cave palace of Kadeejah (Edy Vessel), whose hobby is turning unwary guests to stone. She promises to aid Karim in his quest if he but stays one night with her. Suspicious of her and seeing her slip a potion into his drink, he agrees to stay and seals it with a kiss, all the while swapping goblets (and spit!) - they toast, she chokes, she turns to stone - easy as that!

With Kadeejah's death comes a cave-cracking crescendo, and the falling of a cave wall which reveals a winged horse. Karim mounts and takes to the sky, with the horse making a beeline to the Palace of Heaven, floating on a cloud, wherein lies ... you guessed it, the Blue Rose. Osman, meanwhile, has already slunk back to Baghdad with a bogus Blue Rose, which immediately turns white and dies when Amina touches it. The Prince has had enough, and begins to marshal his troops of 20,000 men for the siege of Baghdad, while Karim wings it to the palace.

The djinn stops Karim long enough to give him a magnificent jewel, saying he can only call upon it one time for one wish. Karim repeatedly asks him who he is, but the djinn just smiles and tells him he'll find out all in good time.

As Karim nears his destination, he sees the siege taking place, and, landing, brings forth the jewel. Making his silent wish known, he throws the jewel into the air ... and 20,000 identical Karim's burst forth upon the scene, laying waste to Osman's troops! Karim saves the honor of the final battle with Prince Osman for himself, sending him and his battered and broken survivors limping home. During the final hack-and-slash battle between the two of them, however, the Blue Rose is dislodged and trampled upon.

Karim is given a hero's welcome by the Sultan and Amina, but dejectedly shows her the stem of the destroyed Blue Rose. "It was all for nothing", he tells her. She takes the stem, and the Rose magically regrows to full bloom - they kiss, the Sultan declares Karim the victor and new Sultan, and all is well. Just as they are about to leave the throne room, Karim espies an alabaster bust of the djinn who helped him all through the adventure. He asks the Sultan who the bust is of, only to be told that was his Uncle, the Sultan before him! With a final shot of the bust, which opens it's eyes and gives the audience a last friendly wink and a smile, the end credits roll.

If you're looking for a family friendly fantasy, one that will thrill the young ones and get their imaginations flowing, you can't go wrong with ANY of the THIEF adaptations - this one is particularly a big hit with kids. It was very heavily promoted for it's American release, having both a paperback novelization tie-in and a comic book tie-in at the time (rare for this kind of film - see pictures above).

Finally, a word about one of my all-time favorite villains: character actor Arturo Dominici, who plays Osman. I will watch literally ANYTHING he is in; he's like the Vincent Price of Italy, and had a long and distinguished career as a bad guy in dozens of films. He had co-starred with Steve Reeves in the original HERCULES, but his most notable role was as Javuto, Barbara Steele's demonic henchman in BLACK SUNDAY. In addition to all his roles on screen, he also had a busy career as a dubbing artist/voice artist for many foreign films released in Italy.

This version of THE THIEF OF BAGHDAD was released on pan and scan VHS many years ago, now long put of print and commanding high prices - hopefully it will someday be restored and get a proper DVD release. It occasionally shows up on TCM, so keep you eyes peeled for it!

Next Time: We return to the land of the TVM with Gene (STAR TREK) Roddenberry's foray into the supernatural, SPECTRE!
Posted by Conjure Cinema Curator at 11:39 AM

Labels: THE THIEF OF BAGHDAD