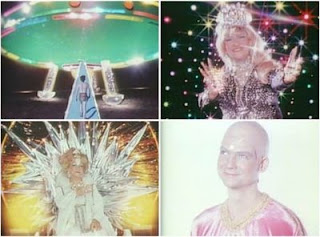 There's weird, and then there's THE ARRIVAL ...

A bit of backstory first. Before Conjure Cinema had officially started, Laura and I had thrown an End-Of-Summer UFO themed party back in 1990. I have always had a soft spot for the ultra-goofy quasi-documentaries that studios such as Sunn Classics were putting out during the 1970s, as well as shows such as IN SEARCH OF ..., so a UFO Party was a match made in Heaven. I ran something at the first party, and everyone had such fun that I promised to make it an annual event. So even though Conjure Cinema was only four months old, this was to be our Second Annual UFO Party ... but what to show, what to show?

The Gods must have heard my query, because I had seen a poster in the Fall of 1990 for an evening of odd films being shown in Allston, MA, with the theme being "religious scare films, UFO cults, etc." and I thought "WHAT???!!!" With my friends Debbie and Shawn in tow, we set out to see for ourselves. It was an evening none of us would soon forget.

Held in the upstairs hallway (!) of an old firetrap building with one-room businesses (head shops, an underground comix store, etc.), the enterprising folks who put this on were kindred spirits. With one WWII War-era 16mm projector balanced on a table, the organizers had begged, borrowed, or stolen various prints of various films, ranging from a WONDERFUL film about teenage Judy who was going to HELL for being a "loose girl" to the dangers of 'necking', etc.

The jaw-dropping, showstopping best was saved for last, though ... a 'documentary' from the Unarius Academy of Science (http://www.unarius.org/) called The Arrival. It's about ... um ... about ... you know what? Let's let these good folks explain it themselves:

"This is a true story of reincarnation, reenacted by individuals who were reliving their past lives on the continent of Lemuria 156,000 years ago. Zan, an aborigine and the son of the chief, is contacted by an immense starship while he is on an expedition. In telepathic conversations with the Space Brothers, he is awakened from his psychic amnesia, becoming aware of the reasons for his low state of consciousness and malcontent life."

Mere words do NOT do this justice ... even the picture accompanying this entry doesn't do it justice - only seeing and experiencing this for yourself can do it. The three of us were changed forever after seeing it, and I made a beeline to the organizers afterwards to find out where I could get my own copy! We stumbled out of the showing looking up at the stars with more awe and terror that such things COULD exist - and I knew I HAD to spread the word, about our Space Brothers, about the Force of Nature that was Uriel (aka Ruth Norman, the founder of Unarius), and so much more!

Fast forward to August, 1991, and the UFO Party is going along well. I had a few short subjects and UFO-themed trailers, and then The Arrival was sprung upon an unsuspecting audience. Among mutterings of "Oh-My-God" and more than a few weepings (I think of joy), I knew more converts had been made. By far the best part of the showing had to be at the very end, when the caveman Zan (seen ascending into the spaceship in the top left photo to join the Space Brothers - - one of which is seen in his incandescent glowing robe and oh-so-well-fitting bald head cap) sees Uriel in the starry heavens and goes to be embraced by her firmanent-shaking bosom, when our friend Thoth yelled out: "THAT DRESS! THAT DRESS!" :)

Make no mistake, Mae West has got NOTHING on Uriel ... the second funniest line from the showing comes when Zan (who had been hunting prehistoric beasts) is stopped in his tracks and listens in awe to the telepathic 'lessons' from the Space Brothers. One of our viewers, on the edge of cracking, yelled: "USE THE SPEAR, ZAN!" A moment that lives in Conjure Cinema history, and one that is STILL yelled out, 18 years later, at some of the strangest times ... there are some things you can't unsee, and THE ARRIVAL is one of them.

If you are stout of heart, and brave of mind, you can purchase your own copy of THE ARRIVAL ... just go to the Unarius website listed, and the DVD can be yours. Be warned, it's broken many a strong will, leaving them giggling, weeping puddles of foolishness, gasping for breath - but perhaps you are made of stronger stuff.

Next Time: Our wedding invites arrive in the post and we get all gussied up for THE DEVIL'S BRIDE!
Posted by Conjure Cinema Curator at 11:19 AM