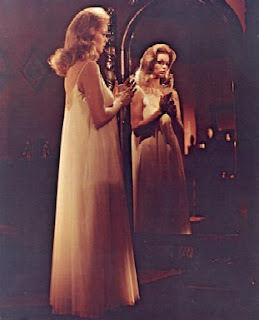 If you're scratching your head right about now, a TVM is a TV Movie, or a movie made for TV (i.e., not released in theaters). Among the 250+ features I was slogging through from the estate sale (see my previous post) was a 16mm print of this TVM. I DISTINCTLY remember seeing this when it first aired (I was 11 years old at the time), and it creeped the hell out of me then! :) It was the very first "Movie of the Week" made for TV, and was a huge ratings hit at the time. It began life as the first of two pilot films for a possible TV series to be called BEDEVILED, and starred Louis Jourdan as "occult investigator" Dr. David Sorell - in this one, Dr. Sorell is called in to help newly widowed Lynda Day George after her husband (played by Bradford Dillman) dies in an auto accident in his antique car ... but not before leaving her a mysterious full-length oval mirror. What's so mysterious about that? Only that he returns each night from the dead in the mirror, and beckons her to join him - and she can feel her will giving away. Demon possession, cursed mirrors, and a spooky-as-hell score by Billy Goldenberg helped to knock this one out of the park. Jourdan is eminently believable as Sorell, and the supporting cast is effectively creepy, especially Caroll O'Connor as the late husband's sinister 'friend' who knows more about his death than he's telling. The effect with the mirror and the 'possession' was quite unsettling, and very impressive in those pre-CGI days. I asked Byron Chudnow, the editor on the film, how the effect was achieved:

"In regard to the special effects, we spent a lot of time experimenting with color polarization and other techniques with the technicians in the Universal Optical Department, trying to come up with something special. Although interesting electronic effects could be produced with the equipment then available, there wasn't an effective way of transferring them to film since the only projection system was with CRT with the rasters clearly visible, a throwback to the old kinescopes. I proposed a mechanical wheel (do you believe?) with the images of the various actors sent spinning faster and faster, the effect you can see in the film.

A lot of the mirror scenes were matte shots and for others we used rear projection. I prepared the images of the bedroom or the infinity mirrors along with the optical effects (the characters appearing and disappearing, the fluttering transition from the bedroom to the infinity room), and we used a projector on the stage throwing its image on a screen which was then reflected in the mirror. The problem was that the projector's lens needed to be a certain distance from the screen for it to remain in focus and the screen needed to be a certain distance from the mirror for everything to remain in scale. We never did get the dimensions right and the bed behind the actress is proportionately too large. We hoped the audience wouldn't notice ... Needless to say, they would be considerably simpler now with the advent of digital imaging and the perfection of electronic-to-film transfer."

The film was so well-received that a second pilot film was ordered, entitled RITUAL OF EVIL, and, yes, we showed THAT at Conjure Cinema, as well ... but that's another story (coming soon!) - sadly, as of this writing, neither film is officially available on DVD, but with Warner Brothers Archives now releasing some of THEIR TVMs, hopefully Universal will see the light (as well as the $$$ signs) and release these long-lost shudderfests for old and new fans alike.

Next Time: We Watch The Skies as CC revels in the lunacy of it's Annual UFO Party!
Posted by Conjure Cinema Curator at 7:24 AM