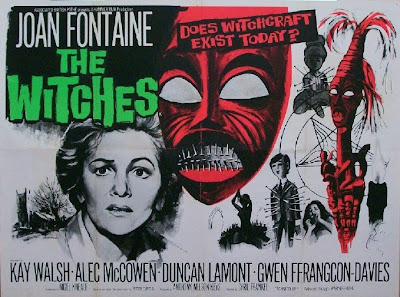 With the success of our first show (and the accompanying donations for the shelters), we decided this could work on a regular basis, and moved on to our second feature. June 15th, 1991, saw our presentation of THE WITCHES (aka THE DEVIL'S OWN) , from Hammer Film Studios, made in 1966. It starred Joan Fontaine (younger sister of Olivia de Havilland) as a English school teacher who is recovering from a nervous breakdown in Africa and takes a post in England, only to find the small town she's moved to is home to a witches' coven with plans to sacrifice one of her students! The screenplay was by Nigel Kneale (famous for the Quatermass character and series) and Miss Fontaine both owned the rights to the story and wanted to star in it, so the deal was made with Hammer. Sadly, the film did not do well and was her last role before retiring. 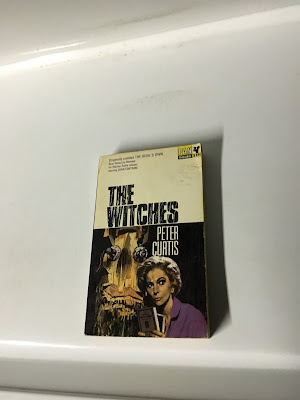 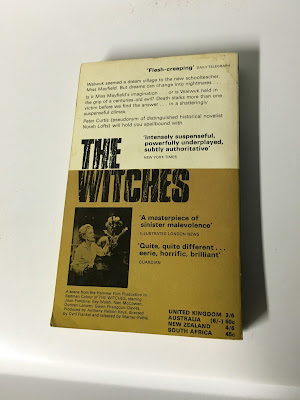 I showed this title from a 16mm print in my collection. An interesting story, that: I had met up with a lady who had an entire estate collection of 16mm films she wanted to get rid of. The father had been a collector, but the rest of the family wasn't interested in the prints, and just wanted them gone. I said I'd be happy to help, but needed to see the prints first, so I could grade them and give a proper description of the film's condition. I drove our tiny car up to her place, thinking it was going to be 5 - 10 prints, tops. Imagine my surprise when she took me to the outdoor shed, opened the door and it is filled FLOOR TO CEILING with 16mm prints! By the time it was finished, I had sold approximately 250 different features (of all types of genres, comedy to romance to sci-fi to horror to Westerns, etc. - all of which I had to watch first). The lady offered me a comission to sell them, but just after taking a spot-check of the titles listed, we agreed that instead I could have first pick of any of the titles they had, and that would serve as my commission. That's how THE DEVIL'S OWN (since this was an American print) came to be our second show. Due to this being on 16mm film, there was one more short break built in, as I had only one projector and an average 90 minute 16mm feature is on two 1600' reels, holding app. 45 minutes of film per reel. Update: Twenty-six years later (in 2017), I was helping retired friends of mine move to a new house. They were downsizing their massive book collection and what was one of the books I inherited? The UK Hammer Films tie-in novelization to - THE WITCHES! Next: The Debut Of The TVM.
Posted by Conjure Cinema Curator at 11:00 AM

Labels: THE WITCHES (aka THE DEVIL'S OWN)