How I Choose The Films 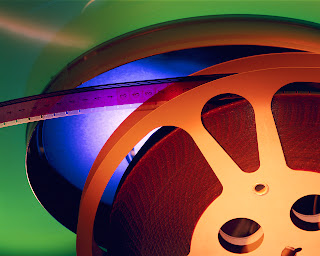 Conjure Cinema has now been going strong for 18 years (with a break for the birth of our son), and I have often been asked, "Where do you get all those weird films?" or "How do you choose what to show?" Well, to answer the first, I have been an avid film collector since 1973, when I was 16 years old. I had been an avid film WATCHER for as long as I can remember, but on Christmas, 1973, my mother got me a Super 8mm projector, a folding screen, and three Super 8mm digest films (a cartoon, a second film which I don't recall, and the digest print of THE INCREDIBLE SHRINKING MAN which I ran over and over). That's what started my collecting mania - it was one thing to watch the films when they ran on TV - but to actually OWN the films and learn how to splice and project them was a whole different thrill! I collected many more Super 8mm films over the years, then eventually moved up to 16mm sound films, and briefly even toyed with the idea of a 35mm portable projection system (not as odd as it sounds: I actually have a friend who has one in his basement! The main downside: you have to change reels every 20 minutes!)

I was late to the show for the advent of the home video revolution, missing Beta video entirely (I was in school and had very little spending money), but did eventually get on the VHS bandwagon. I was much more intrigued, however, with the new technology of videodiscs ... and promptly got on the wrong horse there by throwing my money into the CED VideoDisc system. To explain: before there were DVDs (yes, Virginia, there was such a time in the Dark Ages), there were two competing video disc technologies: laserdiscs (the direct precursor to DVDs, using the same laser technology, hence the name LASERDISC) and CED discs, or Capacitance Electronic Disc {see their Wiki entry here: http://en.wikipedia.org/wiki/Capacitance_Electronic_Disc. The CED disc was doomed to failure out of the gate, due to the fact it was a needle-based technology, just like the 12 inch vinyl LP records you (or your Mom or Dad) used to play, and had the same skipping problems old LPs did. Irritating doesn't even BEGIN to cover watching a skipping CED disc. Anyways ... after CED died a grisly death, I threw in the towel and embraced the competition of laserdisc, only to have IT die a horrible death, due to a combination of a pressing plant error called laser rot (Google it: it's fun!) and the advent of the new kid on the block: the DVD. Remember when I said at the beginnning how my collection is known as the Museum of Failed Technology? Well, this will give you some idea why: between 6000+ VHS tapes, 100+ laserdiscs, 50+ 16mm films, and 1000+ DVDs later, you can see I don't lack for WHAT to show.

As for HOW I choose what feature to show for Conjure Cinema, there are a few criteria I always follow: 1). The feature MUST have some sort of magic or witchcraft theme (hence the name); 2). The feature MUST be 90 minutes or less. Why? Because in addition to the feature itself, I usually show 30 minutes of short subjects ahead of time, followed by a brief intermission. So a typical evening goes like this: doors open at 6PM, with people bringing an item for potluck and two hours of socializing, then the shorts at 8PM, brief intermission (10 - 20 minutes), then the feature (90 minutes). This way we're not straining the patience of either the host or the audience to the snapping point; 3). My final criteria - the RARER the BETTER. I am a student of world cinema, interested in films from ALL different points of the globe, and love to find and show something my audience have either never seen before or (in many cases) never HEARD of! What is the point of having a film get-together just to see something that everyone has ALREADY SEEN? It's much more memorable to show people something they are not familiar with (and will stick in their minds more readily) than something EVERYONE is well aware of. With this in mind, I have tracked down titles from around the globe, as well as going far back into my childhood and adolescence for those features (and made-for-TV-movies) that resonated with me back then. Those are usually my favorites to show, as I have a personal connection with them that I can then share with the audience. So there you have it: how these few, these lucky few, are chosen. Next: Our Second Show.
Posted by Conjure Cinema Curator at 6:42 AM

Labels: How I Choose The Films