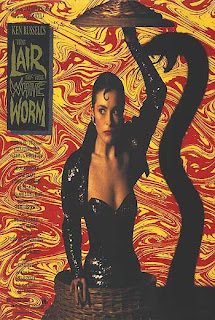 Bram Stoker (1847 - 1912) is best known, of course, for the novel DRACULA, and all the subsequent adaptations that were to follow, both on stage and in film. He did write other novels, however, including THE LAIR OF THE WHITE WORM (aka THE GARDEN OF EVIL), which was to be his final work, published in 1911, one year before his death.

The film version of the novel was released in 1988, directed by Ken Russell and starred Amanda Donohoe as Lady Sylvia Marsh, last acolyte and High Priestess of the snake god Dionin. It turns out Dionin is also the legendary "d'Ampton Worm", who is still very much alive and being fed errant travelers, unwise spelunkers, and whoever else the immortal Lady Sylvia can get her claws (and poison-spitting reptilian fangs) into. Speaking of her fangs, one drop of the venom from them will cause nightmarish hallucinations (courtesy of Ken Russell and his special effects department), as two sisters, Mary and Eve Trent (played by Sammi Davis and Catherine Oxenberg) find out. When Eve is abducted by Lady Sylvia as the next sacrifice to Dionin, it's up to the Lord of the Manor, James d'Ampton (Hugh Grant) and a Scottish archaeology student (Peter Capaldi) to come to the rescue and put an end to the herpetological horrors.

Interestingly, Stoker based part of his novel on a well-known legend in the UK, that of the Lambton Worm (which you can read about here: http://en.wikipedia.org/wiki/Lambton_Worm). Russell slightly changed the name (from Lambton to d'Ampton), but thanks to the film, the legend lives anew.

Russell's film is a very uneasy mix of horror and humor, first lulling you into a false sense of security with some very slinky (and kinky) acting from Amanda Donohoe, and then turning on a dime with a graphic horror sequence involving the aforementioned venom, showing the desecration and rape of nuns in ancient times. From that point on, your cage is rattled (or is is rattlered?) for the rest of the film, not knowing what Ken Russell has up his sleeve.

Recommended, but probably NOT for the squeamish, LAIR OF THE WHITE WORM is one to watch curled up and home with your sweetie ... but make sure they're not afraid of snakes!

Next Time: We FINALLY get around to showing some much-needed culture at Conjure Cinema with the French masterpiece SORCERESS!
Posted by Conjure Cinema Curator at 7:33 AM

Labels: LAIR OF THE WHITE WORM