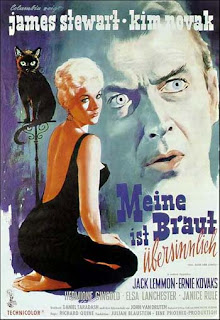 Happy New Year! I hope you all enjoyed your holidays, as well as our K.A.C. holiday countdown - but enough about Christmas ... let's get back to what we do best here, talking about the films we've shown and all that entails. So let's pick up where we left off with ... well, what do you know? A Christmas film!

Not in the same spirit as, say, IT'S A WONDERFUL LIFE, but both that film and this take place at Christmas time. BB&C opens on Christmas Eve, with the drop-dead gorgeous Kim Novak as witch Gillian Holroyd - she and her Siamese familiar Pyewacket are bored on this evening, and she takes a fancy to her upstairs neighbor, book publisher Shepherd Henderson (James Stewart). Gil toys with the idea of making Shep love her WITHOUT the use of witchcraft, but does nothing about it until she finds out that Shep is engaged to her old college rival Merle Kittridge (Janice Rule). Then all bets are off ...

Shep meets the rest of Gil's family - her pixie-like, nervously befuddled Aunt Queenie (Elsa Lanchester) and her sardonic, sly brother Nicky (Jack Lemmon). The Holroyd's all go off on Christmas Eve to the Zodiac Club, a swinging jazz club for those "in the know" (i.e., only open to witches). Shep and Merle decide to check it out for themselves (even with all the clues, Shep is still not the brightest bulb in the socket; just as well, or we wouldn't have a film!) - Gillian, upon seeing Merle, remembers her charming college ways, including ratting out Gil to the Dean for going to classes barefoot, stealing other girls' boyfriends, etc., and decides it's payback time.

While seated at their table, Gil tells Shep about Merle's greatest fear: thunderstorms. As an amused Queenie looks on, Gil remarks how strange it was just how MANY thunderstorms they had their senior year - she then motions to Nicky and the band (in a very funny bit) to surround Merle with their trumpets and bongos and serenade her in a vivacious rendition of 'Stormy Weather', which sends her screaming from the club! :)

Gil is determined to make her revenge complete and, using Pyewacket, performs a love spell to make Shep hers. Then the unexpected happens - she actually DOES fall in love with him, which is a "witchy no-no". You see, according to the lore of the film, witches can not blush, they can't cry, and if they ever fall in love, they lose all their powers!

Nicky throws a magical monkey wrench into the whole proceedings, however, by going public about his abilities with author Sidney Redlitch (Ernie Kovacs), threatening Gillian's happiness. Nicky wants the money from the book, Gil wants Shep, and they both come to loggerheads. She casts a spell making the book unpublishable, and Nicky promises retaliation in her love affair. Gil beats him to the punch, however, and admits all to Shep. He doesn't believe her at first, but when she proves he's under her spell and that he broke off his marriage to Merle because Gil was bored and "liked him", he breaks off their relationship and moves out of the apartment building. Nicky and Redlitch take Shep to master witch Mrs. de Passe (Hermione Gingold), who undoes Gillian's spell (via a Very Nasty Brew) and makes him a free man. Still ...

Months later, Shep is a total grouch, yelling at his secretary and miserable; Gil has a new store, has traded in her sexy black outfits for more demure clothing ... and is miserable; and Queenie is miserable and determined to bring them back together. Queenie sends Pyewacket to Shep's office, who then has to bring Pye back to Gil. Seeing her for the first time since his move, he notices the change in her store, her clothes ... and her. Gillian tells Shep Pyewacket is no longer her cat, but Queenie's, and Shep notices her in a new light. He sees her blush, sees her cry ... and (having read up on the subject) knows that can only mean one thing: she has fallen in love (with him) and has lost all her powers! While the lovers embrace, Queenie and Nicky look on from outside, walk down the street with Nicky hexing out all the lamp posts, including the very last one on the street, which has a perching, purring Pyewacket getting in the last word of the film!

The movie was based on the 1950 play by John van Druten, and was only the second film to feature a witch as a romantic lead (the earlier one being 1942's I MARRIED A WITCH {see my earlier blog on this title}). It preceded the TV series BEWITCHED by six years, and along with I MARRIED A WITCH is considered the basis for the series.
Aside from the "interesting witch lore" used in the film, it is a charming (no pun intended) romantic comedy, that holds up to repeat viewing. One final note: there were nine Siamese cats used in the film - Kim Novak was supposedly so taken with her 'close-up' Pyewacket during the filming of the movie that she adopted him at the film's end ... and they lived happily ever after!

Next Time: Our Space Brothers descend again for our annual UFO Party, and this time drag us kicking and screaming into ... The Bermuda Triangle!
Posted by Conjure Cinema Curator at 11:08 AM