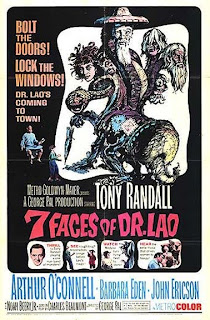 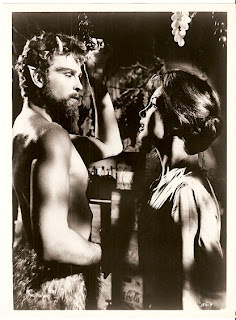 The cold, chill winds of December blew relentlessly upon the huddled, miserable masses in Boston in 1992 ... so I thought: "What better time to show a movie set in a desert town in Arizona?" Not just any film, mind you, but one that was near and dear to my heart, 7 FACES OF DR. LAO.

Before I talk about the film, however, a few words about the novel upon which it is based. THE CIRCUS OF DR. LAO was written in 1935 by Charles G. Finney. It can be read on a number of levels, from an enjoyable quick fantasy to the underlying tales of the human condition that are slyly hidden within. I have lost count how many times I have read this book; I wore out a number of paperback copies in my youth, have given away more copies to friends and have always had at least one copy in my collection at all times. Set in the town of Abalone, Arizona, it is filled with a typical cross-section of humanity, with all their foibles, vanities and shortcomings. Out of nowhere comes Dr. Lao, an Asian magician with a circus unlike any other: instead of lions, tigers and bears, his creatures are all from mythology and legend: The Golden Ass, the Sphinx, the Hound of the Hedges, a mermaid, The Medusa, and more. Each is there to teach a lesson to the people of Abalone ... if only they are wise enough to hear it.

Miracles are shown and disbelieved; magical scenarios are played out to an audience who, by the end, are certainly older but none the wiser. As each act builds on the one that came before, the townspeople become more and more caught up in the spectacle, but never grasp the important hidden meanings behind what they are seeing. It all leads up to the main attraction: the Pagan God Yottle and the obliteration of His followers for displeasing Him. As mysteriously as the circus appeared, it is gone again, leaving the puzzled townsfolk to wonder (some for the rest of their lives) just what they had seen.

This description only touches the surface of what is found in the book: for the men of the town (for example), there's the Adults Only tent: not filled with hootchie-kootchie girls doing lascivious dances, but the Real Deal - a young satyr on the verge of adulthood, peeping nervously at a wanton circle of nymphs. They know he's watching and tease and bother him with their dancing, getting closer and closer to him until they bound on him, cutting off his escape. As he submits to the pleasures of the flesh, one of the old codgers remarks, "Hot stuff!"

Hot stuff, indeed, especially for 1935 - and still too hot almost 30 years later when director George Pal brought the tale to the screen. The basic plot is still there, but many of the lessons have changed or been watered-down to make them more "family-friendly" - a number of the mythological creatures of the book are gone, and some have undergone a complete metamorphosis: instead of a quivering pubescent satyr, we are now treated to Pan, the God of Joy. The Medusa survives intact, as do the Serpent (supposedly the original serpent who tempted Adam and Eve), along with Merlin the Magician, Appollonius of Tyana and the Abominable Snowman.

Dr. Lao was played by Tony Randall, in what I consider to be his best role. George Pal originally wanted Peter Sellers for the role, but was overruled by the studio. I believe they made the right choice, as I fear Sellers would have steered the character too much into buffoonery. Randall had the role of a lifetime, and knew it: he played all of the roles listed above (voice only for the Serpent, as it was a stop-motion animated model, courtesy of Jim Danforth). Technically, he plays EIGHT roles in the film - during the final spectacle in the main tent of the circus, as the townfolk are wondering at the procession, there is a quick cameo of Tony Randall as ... Tony Randall, shaking his head at how woebegone and moth-ridden the various acts are!

The basic plot of the film concerns one Clinton Stark (Arthur O'Connell), who is trying to get all the citizens of Abalone to sell out of their dying town and move away. He has inside information that the railroad is coming, and is eager to make a killing. Opposing him is crusading newspaper editor Ed Cunningham (John Ericson), singlehandedly trying to save the town and the people from making the biggest mistake of their lives. Ed is in love with the beautiful, widowed town librarian Angela Benedict (Barbara Eden), a spinster before her time and mother of the OTHER hero of this tale, young Mike Benedict (Kevin Tate).

Most of the film is seen through Mike's eyes, who still has the awe and sense of wonder that a circus inspires in the young and young at heart. He hits it off with Dr. Lao and tries repeatedly to join the circus, but Lao lets him down as easily as possible every time.

Dr. Lao advertises in Ed's newspaper the coming of his circus, which is in town for only two nights, and everyone turns out, with each person being guided to a particular tent. Stark goes into the tent of the Great Serpent, and is surprised to see an exact talking reptilian version of himself, who not only completely humiliates him as being one of the poorest representations of the human race He has ever seen, but also knows the secret of the railroad. Stark panics until the Serpent explains that his secret is safe with Him.

Mrs. Cassin (Lee Patrick), the town gossip, has her comeuppance by having her future told by Appollonius of Tyana. Not realizing his curse of having to speak the complete truth to a customer, he delivers the films' most poignant lines about her bleak future: "Childless you are, and childless you will remain. Of that suppleness you once commanded in your youth, of that strange simplicity which once attracted men to you, neither endures, nor shall you recapture them ... When you die, you will be buried and forgotten, and that is all. And for all the good or evil, creation or destruction, your living might have accomplished, you might just as well never have lived at all."

The showstopper of the circus is the Medusa - as Dr. Lao points out, there's always one citizen in every town who thinks She's a fake and is turned to stone. Abalone is no exception, with the town harpy Kate Lindquist (Minerva Urecal) determined to prove Lao a charlatan. She whips around the curtain and mirror arrangement used to safely display the Medusa ... and is promptly turned to stone! Merlin, who has seen it all (and, we're led to believe, has had to do this conjuration before), turns her back ... she, at least, has learned her lesson.

While the townspeople are at the circus, Stark's henchmen trash the newspaper printing press, which Ed and his pressman discover and consider finally throwing in the towel. The next morning (thanks to Dr. Lao's magic), the press is good as new, and Ed prints an even more scathing attack on Stark, delivering the issue to him personally.

The second and final night of the circus is devoted to the Spectacle of Woldercan - imagine an IMAX presentation under the Big Top. It's a cautionary tale set in ancient times, about a rich, evil man willing to give people lots and lots of money ... just for a signature. Are they selling their property - or their souls? Even more disturbing is that everyone in the audience has a doppleganger on the screen, and none of them are covering themselves in glory. Finally, the Lord Above is wroth at the town and it's greedy, sinful people and destroys it utterly. The lights fade, the Big Top disappears ... and everyone finds themselves in the Town Hall, ready to put to a vote whether to sell out to Stark or not. The unanimously vote no, and Stark (who has had his own epiphany) tells them the truth.

His henchmen, disgusted by the turn of events, decide to bust up Dr. Lao's circus for revenge. Shooting the doctor's pet fish out of it's bowl, they are horrified to find one MORE attraction rarely seen - the Loch Ness Monster, who doubles his size every ten seconds when not in water! Reaching gargantuan size, it chases the villains, at one point cornering them and sprouting all seven heads of the different personas of the doctor.

Mike alerts the doctor, he gets out his rain-making machine to shrink Nessie back to goldfish size, and all is well. Mike tries one final time to join the circus, where Dr. Lao lets him down gently with one final lesson: "Mike, let me tell you something. The whole world is a circus if you know how to look at it. The way the sun goes down when you're tired, comes up when you want to be on the move. That's real magic. The way a leaf grows. The song of the birds. The way the desert looks at night, with the moon embracing it. Oh, my boy, that's... that's circus enough for anyone. Every time you watch a rainbow and feel wonder in your heart. Every time you pick up a handful of dust, and see not the dust, but a mystery, a marvel, there in your hand. Every time you stop and think, "I'm alive, and being alive is fantastic!" Every time such a thing happens, you are part of the Circus of Dr. Lao."

7 FACES OF DR. LAO is available on DVD and is required viewing for everyone reading this - it is a wonderful fable, and one with lessons to teach each and every one of us ... if only we are willing to listen.

Next Time: A new year (1993) of viewing dawns at Conjure Cinema, and we go straight from the sublime to the ridiculous, with 1967's PREHISTORIC WOMEN. If you are brave enough to face the Legend of the White Rhino, be there!
Posted by Conjure Cinema Curator at 5:43 PM