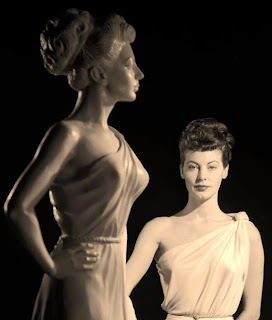 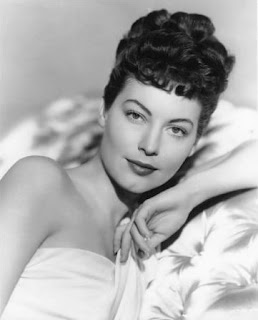 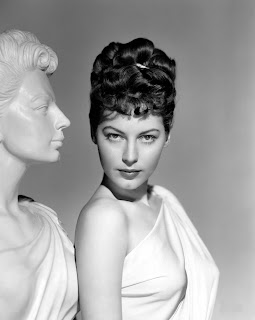 With our September show, we launched our first full-scale musical, ONE TOUCH OF VENUS. I admittedly had reservations about showing this, not knowing how a modern audience would react to it, but I need not have worried. The folks who were in attendance that evening were quite taken by the film, the plot, and the music, and it still holds up well today.

The film is based on a Broadway musical with a very interesting pedigree: music by Kurt Weill, book by S.J. Perleman and Odgen Nash (!), with lyrics by Nash, as well. The story was loosely based on the book The Tinted Venus by F. Anstey (Thomas Anstey Guthrie), who was also responsible for The Brass Bottle, which was turned into a charming fantasy starring Tony Randall and Burl Ives (an upcoming entry in my blog). All of this was, of course, adapted from and poking fun at the original Pygmalion myth.

The play starred Mary Martin, who was also going to star in the film. However, she got pregnant and the film rights were sold to Universal, who kept the plot and little else, dropping a good portion of Weill's original music and adding new songs by Ann Ronell, who coincidentally just happened to be director Lester Cowan's wife. While the music took a turn for the worse, the replacement actress in the title role was (pun fully intended) heaven-sent.

I'll admit right now that I can't be impartial when talking about this film, as Ava Gardner was (and is) my hands-down favorite old-school Hollywood actress. A stunning beauty, Ava (1922-1990) was the perfect choice for the Goddess of Love. The plot concerns a department store window dresser, Eddie Hatch (Robert Walker), who is called upon by store owner Whitfield Savory II (Tom Conway) to fix the sticking drapes of a $200,000 statue of Venus before it's unveiling to an admiring public (think Macys, but with it's own art gallery ... when was the last time you ever heard of a department store with it's own art gallery?) - as Eddie is working on a ladder to get things working smoothly, he sneaks a peek at the statue and, in a moment of impetuosity, gives it a kiss, magically bringing it to life.

Venus is delighted and smitten with Eddie and wants to experience more of the human feeling of Love, but only has a limited amount of time on Earth to do so. A whirlwind of unrequited love affairs complicates matters further, with Eddie's casual girlfriend at the store, Gloria (Olga San Juan), getting more and more aggressive with her talk about marriage; Eddie's best friend at the store Joe Grant (Dick Haymes) secretly in love with Gloria; and the wise-cracking bosses' secretary Molly Stewart (fabulously portrayed by Eve Arden) pining for the one man who doesn't notice her. With the Goddess of Love now roaming the Earth in human form, all of these relationships come crashing together in a comedic crazy-quilt.

Things go from bad to worse at the unveiling, with the statue missing and Savory calling for Eddie's head. The police drag Eddie back to the store and he has to re-enact what happened. After finally being allowed to go home (with the suspicious police keeping an eye on him), Gloria and Joe show up and try to help, first with a hot bath and then with an offer to run and get him soup. As he's getting ready for his bath, who pops up but love-struck Venus, sending Eddie into a panic and his landlady banging on the door, screaming about her "no girls allowed" policy!

More merry misadventures ensue, with Eddie finally sneaking Venus back to the store after hours. In order to avoid the security guard, he hides Venus in the Model Home, a look into the pushbutton future ... of course, every button he pushes keeps bringing the bed down from the wall, much to Her amusement. This leads to the signature song of the film (and the play) "Speak Low (When You Speak Love)" - sadly, even though Ava had a perfectly fine singing voice, she was dubbed by Eileen Wilson for the film. It's a lovely tune, and one that has been renewed periodically over the years, with one of the latest versions by Barbra Streisand. As the magical song takes over, Gloria and Joe fall for each other and Eddie stops fighting Fate and kisses Venus.

Venus is discovered asleep in the Model Home the next morning by Molly, who calls Savory down to see Her for himself. Of course, he falls in love with Her, and demands that She be given everything She wants, immediately assuming She will be his new plaything. Rather than being flattered by this, Venus turns him down cold for Eddie, which infuriates Savory to the point of having Eddie arrested. He is used to getting what he wants, when he wants it, with his money ... but not this time.

Eddie takes Venus to a park for an idyllic evening of dancing and romancing, but then ... Her time is up. She is called back to Olympus and must answer the call. She's heartbroken to leave him, he's heartbroken to let Her go (and must be feeling more than a little stupid letting the whole night get away from him like that), and before he can get back to Her, She's gone. Before She leaves, She makes Savory call and have Eddie released from jail, as well as opening his eyes over his love (and need) for Molly.

The film ends with the statue back in place, Savory and Molly heading off to their honeymoon, and a distraught Eddie in front of the statue saying "we never even said goodbye." Just then, a lovely and familiar looking lass walks by ... she just started in the Model Homes department and is the exact likeness of ... could it be??? When Eddie introduces himself, she smiles and gives her name as Venus Jones ... and closes with "Nobody's likely to meet two girls named Venus", thus giving herself away ... and her heart to Eddie. The curtain rings down on the statue and the film, and there's not a dry eye in the house.

The film is available on DVD, in both its original black and white version, as well as a colorized one. It's every bit as enchanting today as when it was first made, and receives my highest recommendation.

Next Time: We turn our sights from the Heavens Above to the Infernal Realm below as we take a RACE WITH THE DEVIL - strap in and join us!
Posted by Conjure Cinema Curator at 7:23 AM

Labels: ONE TOUCH OF VENUS