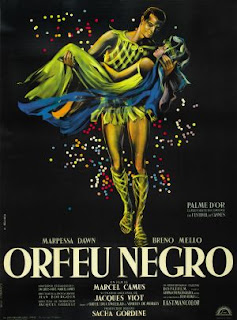 Our second foreign feature was 1959's ORFEU NEGRO, known in America as BLACK ORPHEUS. Directed by Marcel Camus, it is a modern retelling of the Orpheus and Eurydice myth, set during Carnaval in Rio de Janeiro. The film came to my attention unlike any before it: I was paid to watch it. I had been making overtime money as a projectionist for college courses, and one semester (during a Classics course) was called upon to show this film. I knew nothing about it, being more concerned with making sure the equipment and sound were working properly, but part of the job was staying on-site to troubleshoot should the occasion arise.

Imagine my surprise when this magnificent tale unfolded! The students with me at the time were the usual mix: some were interested, some were bored, some were asleep - and the rest had blown off the showing entirely. I was completely captivated, however, by the sheer kinetic energy that inhabited this film and threatened to drag the viewer in - the non-stop music, the dancing, the costumes (ESPECIALLY the costumes); all the elements that go into being the best at Carnaval time, no matter the cost.

The hero of the tale is Orpheu/Orpheus (Breno Mello), the most handsome man in the favela (shanty town) overlooking Rio. By day a streetcar operator and by night a singer and dancer, he is the acknowledged leader of his Samba School. They are practicing for the Judges' Prize at the upcoming Carnaval, and for bragging rights through the upcoming year. Orpheu is also (literally) the Golden Boy of the favela, with all the ladies in love with him and with his Sun costume a vision in gold (see the posters above). He is equated throughout the film with the Sun and Light - in fact, two of the local boys are convinced that Orpheu's guitar playing is what brings the Sun up each morning.

A disquieting symbol of foreshadowing comes early on, as the boys have a Sun kite they are trying to fly on their mountaintop meadow - it flies proudly for a few moments, then begins it's inevitable descent (with the boys frantically trying to stop it), mirroring Orpheu's descent to the Underworld to come. Orpheu is reluctantly engaged to the fiery Mira (Lourdes de Oliveira), a beautiful but controlling harpy. On the eve of Carnaval, she drags him to the town clerk's office for a marriage license. Upon hearing his name, the clerk innocently asks if Mira is Eurydice. Not knowing the legend, Mira becomes jealous, thinking Orpheu is seeing another woman.

The irony here is Orpheu already HAS seen Eurydice (Marpessa Dawn) - he just didn't know it. She arrives that same day and rides his trolley to the end, to get to her cousin's house. Her cousin Serafina (Léa Garcia) just happens to be Orpheu's next-door neighbor ... and so the table is set. Eurydice has not come to Rio for Carnaval, however ... she is there to escape Death. He has already come to her in person and she hopes to lose Him among the crowds.

Orpheu sees Eurydice again upon arriving home and is enchanted by her - she is everything Mira is not: quiet where Mira is brash, innocent where Mira is vulgar, etc. Orpheu loses his heart to Eurydice and, when Serafina's boyfriend arrives for the night, offers Eurydice his bed. He sleeps outside in a hammock, or tries to. To tame his haunting thoughts of Eurydice, he sings a gentle love song, which brings her to the door of his shack - and the lovers together.

The day of Carnaval dawns, with the native boys awaiting Orpheu's raising of the Sun with his guitar playing. Coincidentally, just then he plays to awaken Eurydice. Serafina sees that Orpheu has finally, genuinely fallen in love and arranges to have Eurydice dance in her place at Carnaval, wearing Serafina's costume and remaining veiled (in order to fool Mira). All goes well until Mira sees Serafina and her boyfriend in the crowd and rips Eurydice's veil off, vowing to kill her. As Eurydice escapes, Death (in a Carnaval costume of a skeleton) finds her again and chases her.

Eurydice escapes to the streetcar station, where a tense cat and mouse game begins between her and Death. Orpheu arrives to save her, and, unable to find her in the dark, switches on the lights in the station. Unfortunately, Eurydice was holding on to the trolley wire and is accidentally electrocuted by her lover. Death tells Orpheu: "Now she is mine", and Orpheu goes into a paroxysm of grief.

Her body borne away, Orpheu goes into denial and wanders the streets, determined to find her. He winds up at the police station and goes to the Missing Persons office on the twelfth floor. The janitor tells him there is no one there, only papers, and hearing Orpheu's plight, tells him he can help Orpheu find Eurydice. In a beautiful adaptive touch of the myth's Descent, Orpheu and the janitor are seen (from above) going down, down, down the spiral staircase to the red floor far below.

The journey doesn't end there - Orpheu is led to a local cemetary, guarded by a Great Dane named Cerberus (of course! :)) - inside the cemetary, he is led to a macumba ritual wherein he hears his beloved Eurydice calling from behind him, asking if he can just be content with her voice. He is warned that if he turns around, he will lose her forever, but (just as in the original story) the temptation is too much and he turns, angered to find Eurydice's voice coming from a possessed practitioner.

Orpheu's journey comes to it's predestined end, as he gets Eurydice's body from the morgue and promises they will be together always. He begins his trip up the mountain in the pre-dawn hours, only to arrive at the top to find his shack set afire by Mira in a jealous rage. Seeing the lovers, she throws a rock that hits Orpheu in the head and sends them tumbling over the mountain's cliff ... together at last in death.

The coda has one of the boys give the other Orpheu's guitar, telling him to play to bring up the Sun. The other boy protests he doesn't know how, but is encouraged to play anyway, and as he does, the Sun rises for another day. He is proclaimed "the new Orpheu", a little girl asks them to dance, and the circle of life, love, and death continues.

BLACK ORPHEUS is available on DVD in a magnificently sumptuous transfer as part of the Criterion Collection, and comes with an exhaustive book on the background and making of the film. It is a beautiful film, one that all Conjure Cinema fans should see.

Next Time: My personal favorite film of all time is discussed - THE 7 FACES OF DR. LAO! Be there!
Posted by Conjure Cinema Curator at 12:11 PM