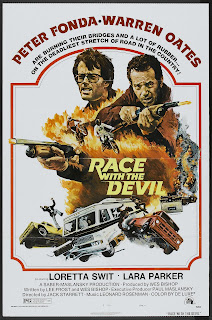 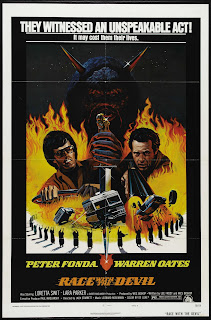 The summer of 1975 was a Hell of a good time for me. Why? It was the summer that I affectionately remember as the "Summer of Satanic Panic", thanks to two Devilishly fun drive-in films: June's RACE WITH THE DEVIL and July's THE DEVIL'S RAIN (the subject of a future entry here) - I managed to finally catch up to both (along with THE LEGEND OF HELL HOUSE) on a drive-in triple bill at the (sadly defunct) South Shore Plaza Drive-In. They don't make evenings better than that! :)

The story concerns two couples, Frank and Alice Stewart (Warren Oates and Loretta Swit) and Roger and Kelly Marsh (Peter Fonda and Lara Parker), who take an RV vacation together from San Antonio, Texas to Aspen, Colorado - two weeks of stress-free skiing, dirt-biking, and drinking. After driving all day, they pull off for the evening in a secluded, off-the-beaten-path area and settle in for the evening. Perfect creekside view, lovely full moon ... what could possibly go wrong?

Frank and Roger find out, as a bonfire erupts across the creek and a coven of devil worshippers begin their ritual. Taking their binoculars, the guys inch closer to get a better view - giggling with titillation at the nude female revelers, they're having a grand time ... until Frank witnesses a girl ritually sacrificed. Horrified, they run for the RV, just as Alice opens the door and yells at them to come in for the night. Frank screams for Alice to turn the lights off in the RV, but it's too late. The Satanists see them and come streaming across the river, murder in their eyes.

The film only runs 88 minutes, but it is more action-packed and bite-your-nails tense than most films twice as long. After a harrowing escape which includes the obligatory "RV stuck in the creek while the crazed Satanists get closer" scene, the couples begin the first of many fights for their lives. Two of the cultists smash in the back window and try to get in, with Roger hammering away at them, while another jumps on the main windshield, looking for all the world like the World's Biggest Bug (hey, EVERYTHING is bigger in Texas!) :)

There is a fifth main character in the film, and that is the RV itself. You have NEVER seen a machine take such a massive beating and keep going like this camper does. The more I watch RACE, the better the argument could be made for the RV as the modern equivalent of the medieval castle under siege, with the enemy getting more and more desperate to silence the couples forever.

After reporting the attack to the Sheriff in the nearest town (R.G. Armstrong), Frank and Roger are driven back out to the site to search for evidence. All traces are gone, except a big bloodstain ... and a dead dog. The Sheriff chalks it up to hippies all doped up and acting crazy, has his deputy take a sample of the blood, and drive the men back to his station. He apologizes for the mess, tells them go on and enjoy their vacation - if only it were that simple.

While the men are away, Alice and Kelly are cleaning the RV, when Kelly notices a slip of paper stuck to the shattered back windshield. It is a warning for the couple to be silent about what they've witnessed, or they'll be cursed ninefold, along with the runes of the spell itself.

Thoroughly shaken now, they get a temporary fix on the windshield and continue on to a RV park, hoping to regain their happiness. The girls go for a swim at the center's pool, where Kelly starts to get the uneasy feeling that ALL the people there are watching her ... and could be one of "them". They head back to the camper, and she tells Roger she wants to go home, which Frank vehemently rejects. As he points out, they've scraped for five long years to have this vacation, and they're going through with it.

Some neighbor campers come over and they all go out to the local honky-tonk bar to relax. Kelly gets the feeling again ... from the keyboard player in the band. Is he one? How about the gas station attendant? The librarian? That little old lady? As their neighbor says: "Witches? WITCHES?" Frank has to sheepishly shake his head, knowing it sounds foolish, but still ...

Coming back to the motor home, the couples are met with the terrible sight of Kelly's strangled dog, Ginger, hanging from the door (a further warning to keep silent). This just angers the men more, and they flee the RV park, to put as much distance between them and their pursuers. But it's not far enough, as they find out when they try to get some food from the cabinets - they are set upon by a pair of rattlesnakes ... in a rolling, skidding RV ... at night ...

This becomes the final straw for Frank and Roger. They stop at the next store they find and get a shotgun, shells and other weapons and go on the offensive. It's just as well that they do, for this final section of the film is where EVERYTHING ramps up. Among the beautiful, desolate Texas countryside they are set upon by the cultists in every kind of machine available, from cars to tow trucks to delivery trucks, all determined to ram them off the road and kill them. This is where the film truly shines, with some of the finest stunt work LONG before the advent of CGI, including a spectacular high-speed rollover car stunt that has to be seen to be believed. Peter Fonda estimated the car in question rolled 19 times, and it's a good guess. The car in question is seen briefly in the trailer: http://www.youtube.com/watch?v=wqv6PIH_ymY
Speaking of the trailer, my hat's off to the ad man who came up with the classic line that absolutely sold me on making this the MUST-SEE film of the summer: "When you Race With the Devil, you'd better be faster than Hell!" :)

I won't spoil the ending here, except to say that Kelly was right, everybody IS after them and it seemed the ENTIRE state of Texas were witches ... every man, woman and child! This made for a WILD drive-in night at the end of the summer of 1975 for me ... except when I started to think about it as I left home and headed to my first year of college ... in, yep, you guessed it ... Austin, Texas. As this Northern boy crossed over the state line and stepped out of the car for gas at the station in Texarkana, Texas, his worst fears were confirmed. The attendant just stared and stared at me - then he called his mechanic out, who stared and stared at me ... and I thought "this is it, I'm a dead man, just like in the movie!" Turns out neither of them had ever seen plaid pants before ... but that's another story! :)

Next Time: We explore a truly haunting variation on the Orpheus and Eurydice myth with 1959's BLACK ORPHEUS. We hope you'll join us!
Posted by Conjure Cinema Curator at 10:54 AM

Labels: RACE WITH THE DEVIL