Only three days left! Just enough time to get in some last-minute photos leading up to our 2015 K.A.C. Image of the Year - I've had most of these in the archives waiting for their moment of glory, but most of them are SO damn strange that I can't connect them up to any story! So without further ado, let's take a look (and, as always, you can click on the images to get a LARGER look at them ... although with some of these bad boys, that may not be a good idea!)

The last one was sent in by LizzieBelle, a last-minute squeaker courtesy of Sandwichmonsters.com - thanks!

Which brings us to the Image of the Year. Known as the 'Banksy Christmas Card', the first time I saw the image was just a few days ago, when a friend posted it on Facebook. After doing some more research on it, I found out it was made back in 2005 by noted underground graffitti artist 'Banksy', and re-surfaces every year around December. We're not noted for political or serious subjects here at the K.A.C. (actually, it's something I studiously avoid every year, as you can get your fill of that and more on a daily basis through the Internet or any newsfeed), but given the ongoing refugee crisis, etc., that's happening now, this picture hits home. Love it or hate it as you will, like any good piece of art, it speaks to you and makes you think. I found it such a striking piece when I first saw it that I immediately broke with past year's traditions and gave it the nod for this year's Image of the Year. For more info on it, read the link below: 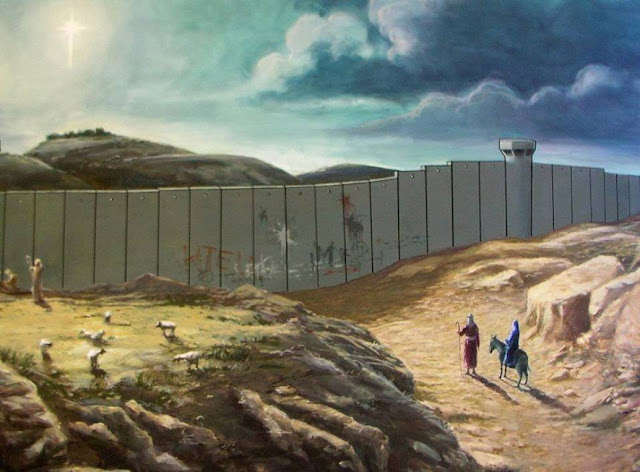 Coming Tomorrow: With only two entries to go, we turn to one of the most charming Christmas legends ... the Night the Animals Talked (and your humble curator's experiments in this regard) - see you then!

Posted by Conjure Cinema Curator at 5:21 AM