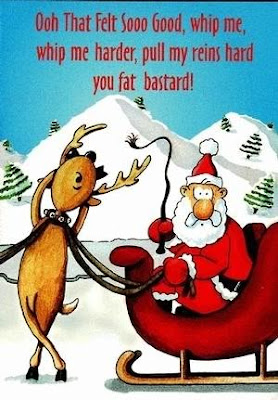 Welcome back! Let me give you a behind the scenes look at how some of these K.A.C. entries come about. I always start with the idea of highlighting some aspect of Christmas or the season and begin to research it to find some interesting tidbit about it. Today my mind turned to Santa's sleigh. Now (kinky reindeer aside) I had always thought that Santa and his sleigh went together like PB & J, bread and butter, Krampus and bad children ... well, you get the idea. Turns out that was not always the case!

I figured after so many repetitions of Clement Moore's 1823 poem 'Twas the Night Before Christmas (or to give it it's proper name A Visit From St. Nicholas) that this is where the whole "Santa and his sleigh" came from - not so! It came from a source even older than the poem (and from a friend of Moore's), writer Washington Irving. As Time Lists explains:

"The author best known for creating the Headless Horseman also created the iconic image of Santa flying in a sleigh. In his 1819 series of short stories The Sketch Book of Geoffrey Crayon, New York native Washington Irving described a dream in which St. Nicholas soared across the sky in a weightless wagon. The stories became so popular, they spawned a Christmas revival of sorts in the States, and even Charles Dickens is said to have credited Irving's work for inspiring his classic holiday tale A Christmas Carol."

So now you know ... and now I'M sitting here thinking of how with one jot of his pen, we could have wound up with the 'Headless Santa' instead! :)

But what about the sleigh itself? Surely there's been some improvements made to it in almost 200 years? Funny you should ask! The good folks at How Stuff Works has the answer for you ... Santa's done a LOT of upgrading over the years and they break down for you just how he does his magic on Christmas Eve (hint: think Antimatter Propulsion Units and Nanotechnology) - go see!

We'll continue this topic with a look at what happens should his souped-up sleigh break down - Plan B: The Reindeer!  Join us tomorrow!

Posted by Conjure Cinema Curator at 4:56 AM