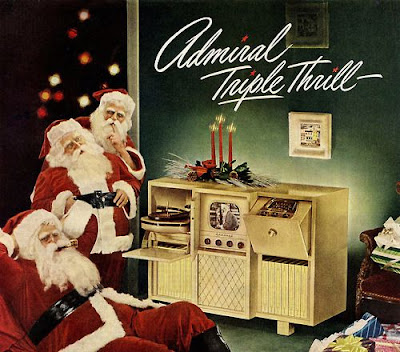 Welcome back - we're eleven days out and we've got a true Christmas treat for you today in our continuing series of Christmas For Your Ears. Our Triple Threat of Santa Clauses (including the rather ghoulish one in back entreating you to be quiet ... or else) are all set to listen to one of our more charming episodes - an episode of The Saint, featuring Leslie Charteris' debonair detective, the 'Robin Hood of Modern Crime'. Most audiences of today remember The Saint from the Roger Moore television series, which ran from 1962 - 1969. But the character had a long history before that series ever aired, including 14 films, the earliest in 1938 and the latest (to date) in 1997.

Today, however, we're concentrating on The Saint's radio career. While there were many different versions of The Saint on radio, the most fascinating starred an inspired choice for Simon Templar, Mr. Vincent Price. As Wikipedia notes: 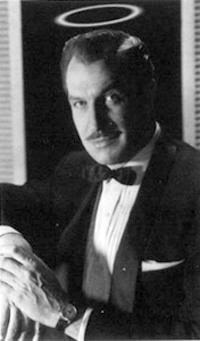 "The longest-running radio incarnation was Vincent Price, who played the character in a series between 1947 and 1951 on three networks: CBS, Mutual and NBC. Like The Whistler, the program had an opening whistle theme with footsteps; some sources say the whistling theme for The Saint was created by Leslie Charteris, while others credit RKO composer Roy Webb. Price left in May 1951, to be replaced by Tom Conway, who played the role for several more months; his brother, George Sanders, had played Templar on film."
There are a number of surprises here, most notably the theme music that's indelibly linked with the character, is nowhere to be found. Instead, a different theme is used here. Also, there is much more dry, sardonic humor here than you would expect. If you're only familiar with Price and his horror films, this will serve as quite an eye-opener for you, especially his repartee with his assistant, cab driver Louie (played by Lawrence Dobkin). So sit back and enjoy, from December 24th, 1950, Vincent Price as The Saint in 'Santa Claus Is No Saint'.


Looking for last-minute gift items for that particularly hard-to-buy-for person on your list? Here's some of the stranger things that have passed our desk lately that you might consider:

The Star Wars Millenium Falcon Shaped Waffle Maker - because why not? What with The Mandalorian being the talk of the town right now, anything Star Wars is a go-to gift. Of course, a Baby Yoda Waffle Maker would be de rigueur currently, but beggars can't be choosers, right? Here you go: 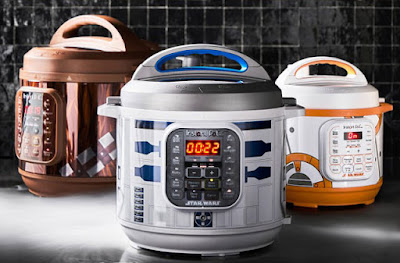 Waffle Makers too lame for you? Want to step up your game? OK, how about Star Wars Instant Pots? Tell the youngsters you're eating R2D2's brains tonight ... listen to the shrieks - no, no, it's delight, trust me! Just ignore those looks of horror! Intrigued? Let the nom-nom-ing begin!

What's that, you say? Enough with the Star Wars stuff? OK, how about something more practical instead - something the handyman or woman in your life can use everyday. Behold the power of fixing things around the house with the THOR HAMMER 44 PIECE TOOL SET! Amazing, right? And only $100 - oh, and you have to be pure of heart to lift it - always read the small print! If you think you qualify, here's where you can get yours:


Operators are standing by - order now!

Back tomorrow with more!
Posted by Conjure Cinema Curator at 5:18 AM