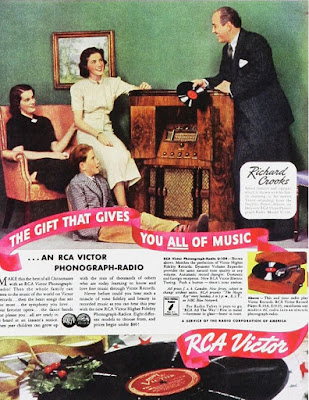 Welcome back - six days to go! When you are having friends or family over, why not impress them with your latest gadget, such as this state-of-the-art RCA Victor Phonograph-Radio! You can listen to your favorite shows OR pop in a LP and be amazed by the faithful reproduction in crystal clear (until some dolt scratches the record) analog sound! What's that, you ask? How much does this beast cost? Now, now, it's Christmas ... cost is no object ... don't be a Scrooge about it!

Well, THAT was a convoluted way to get to today's show in our continuing Christmas For Your Ears programs, even for me! But it's worth it, as you'll soon discover. When I first started researching which shows I was going to cover, I immediately said none of the easy, go-to ones, like A Christmas Carol. Not that there aren't plenty of excellent renditions of the Dickens classic out there, it's just that everyone knows the story backwards and forwards by now, and there's really nothing new under the sun regarding this oft-told tale. However, there IS something new under the prairie moon, and it comes from Hollywood legend James Stewart, who starred in one of the last radio dramas on the air, an NBC Western series called The Six Shooter. it only lasted one season, from September, 1953 to June, 1954, running 39 episodes. As Wikipedia states: 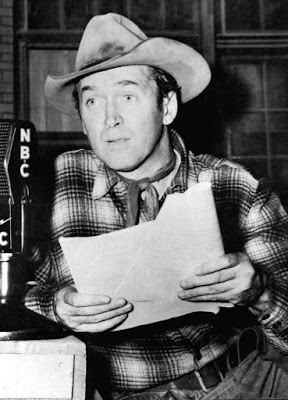 "One old-time radio directory called the program "a last, desperate effort by a radio network (NBC) to maintain interest in adventure drama by employing a major Hollywood movie star in the leading role."

James Stewart starred as Britt Ponset, a drifting cowboy in the final years of the wild west. Episodes ranged from straight western drama to whimsical comedy. A trademark of the show was Stewart's use of whispered narration during tense scenes that created a heightened sense of drama and relief when the situation was resolved."


The episode that concerns us is called ‘Britt Ponset’s Christmas Carol’ and aired on December 20th, 1953. It involves a young lad running away from home who encounters Britt at his campfire, and the Six Shooter tells him ... a rather familiar tale, with some Old West flavor. Saddle up and give it a listen here!

Wasn't that pretty? Guess what ELSE is? Yep, our annual Kringle's Khristmas Kuties Kwiz! You know the drill: match the name to our baker's dozen of Christmas Celebs below - some are easy, some are hard ... click on the photos for a bigger look ... answers will be revealed tomorrow!

That's it! Answers tomorrow!
Posted by Conjure Cinema Curator at 5:29 AM