Good morning! Our journey together is almost done – after a month and a half of Christmas Craziness, I have one more gift for you to open.
What is one of the most engaging traditions this time of year? Here in America you would probably answer, “the tree, the presents, the carols, etc.” But there’s an even earlier tradition – I’ll give you a hint: it’s mentioned in the holiday song ‘It’s The Most Wonderful Time of the Year’- no? OK, remember this part of the song? “There'll be scary ghost stories and tales of the glories of Christmases long, long ago.”
Ah, NOW we’re on the same page. Have you ever wondered what that meant? I did and started doing some research on it. Turns out there are a number of theories about it – the most likely being that Victorian people, not having access to all the distractions we have today, would entertain each other before the fire with different tales … such as a spooky ghost story, one that gives you a pleasant frisson of fear while at the same time reassuring you that ‘it’s only a story’.
The most famous example of the Christmas ghost story is Charles Dickens’ A Christmas Carol. There were a number of other British authors of the period who were publishing collections of short stories for just this purpose, as well. It has become such a long-standing tradition in the UK that it still goes on today, and has spread to other media, such as radio and television. 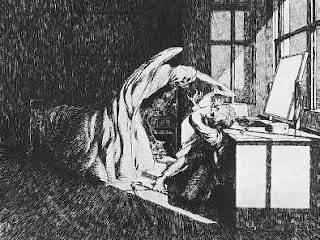 Which brings us to today’s final offering. One of the BEST ghost story adaptations I have EVER seen is this 1968 BBC version of M.R. James’ “Oh, Whistle, and I’ll Come To You, My Lad”. Unlike modern tales, this one takes its time to creep up your spine … it gets more and more unsettling as the story progresses until the climax. This is not a ‘BOO!’ story – one that goes for the cheap scare, the jump-cut, throw-something-into-the-frame scare, this story is the type that will work its way into your brain and stay with you LONG after you see it.
Michael Hordern stars as a professor on holiday who picks up a flute in a graveyard while hiking, translates the titular Latin engraving … and invites in terror. So turn off your lights, gather the family round and enjoy!


And with that, our Tinsel Tour is once more at an end. My thanks to you all for joining me for the last 37 days – it was fun and we’ll do it again next year! My New Year's Resolution is to get back to a more regular blogging schedule as I continue looking back at our original Conjure Cinema films. With that in mind, I’ll be back in a few days, picking up where we left off with my review of one of the strangest of the early 3-D efforts, THE MASK (aka THE EYES OF HELL)!
May you all have a Merry Christmas and a Happy New Year – thanks for reading and for sending me your submissions to share – BYE!

Posted by Conjure Cinema Curator at 6:19 AM