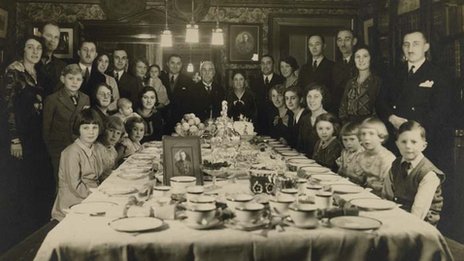 Here's an interesting story that was just reported by the BBC. Take a look at the photo on the left. Before you think this is some odd missing portrait on the wall of the Overlook Hotel at the end of THE SHINING, calm down ... it is actually a photo of the Wall family. What is so important about them? Individually and/or collectively, nothing much. Historically, however, ah ... that's a different story!


As the BBC reports, "Curators at the Museum of London have discovered what they believe to be the first ever recordings of a family Christmas. They were made 110 years ago by the Wall family who lived in New Southgate in North London. There are 24 clear recordings on wax cylinders which were made using a phonograph machine between 1902 and 1917."

Read the whole report (and hear some of these amazingly preserved recordings) here! Staying with our theme of Christmases Gone By, here is a delightful illustration from an 1875 edition of The Saturday Evening Post. The picture at right accompanied a short story called "A Christmas After-Dinner Dream" and you can read the entire tale (as well as take a look at a century of classic Christmas art from the magazine) at the link below: 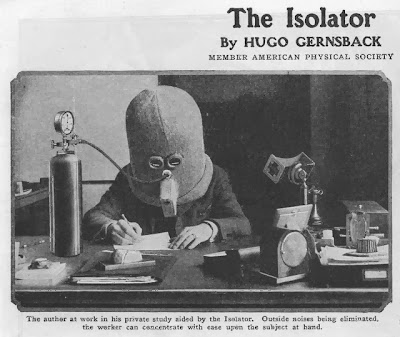 Next, if the hustle and bustle of the season is getting too much for you and you want to escape the world for awhile, I have the PERFECT Christmas gift for you! It's called The Isolator and was invented by "the father of science fiction", Hugo Gernsback (pictured at left). Back in 1926, he published the long-running "scienti-fiction" magazine Amazing Stories ... but Hugo was much more than just a publisher. He was an inventor (The Isolator notwithstanding) with one of the world's first television receivers to his credit, as well as a writer and editor. Read all about him (and maybe even ordering instructions for your OWN Isolator!) here:

What better way to end today's entry than The Twelve Terrors of Christmas by John Updike, with illustrations by Edward Gorey? Click on the link below and enjoy!

Only two more to go!

Posted by Conjure Cinema Curator at 4:06 AM