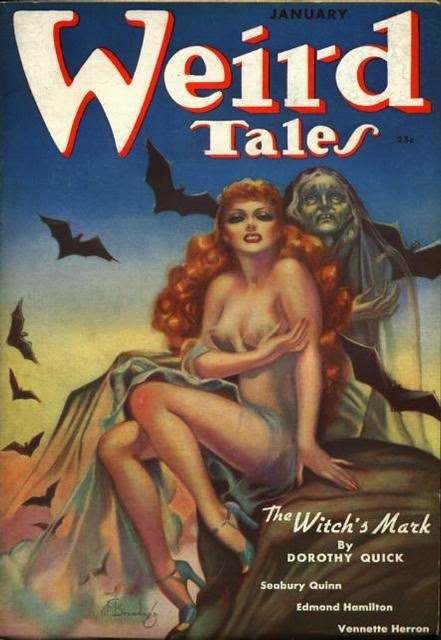 And so we come to the end of another year of the K.A.C. - we've traveled down many weird and wonderful roads ... and speaking of roads, that brings me to my final Christmas gift to you, my patient readers. Besides, doesn't the cover at left just scream Christmas goodwill and cheer to you? No? Well, read on ...

Seabury Quinn (1889 - 1969) was one of Weird Tales' most prolific and popular writers during the magazine's run, winning multiple readers polls over the years for favorite author. He was mainly known for a series of 93 stories and novellas, which ran from 1925 - 1951 that starred his French 'occult detective' Jules de Grandin and his companion in crime Dr. Trowbridge (which is how I became introduced to his writing, when Popular Library reprinted a number of the stories in a paperback series during 1976 - '77). He also wrote a number of other stories, including our selection for this year's Christmas tale.

Looking back over all the years I've done the K.A.C., I'm surprised I've never posted this one before. First published in the January, 1938 edition of WEIRD TALES (with the amazing Margaret Brundage cover at left), it's a marvelous novella entitled ROADS. Anthologist Sam Moskowitz called the story, "the greatest adult Christmas story written by an American". It was so favorably received that it was genre publisher Arkham Books' first hardcover book in 1948, beautifully illustrated by my favorite fantasy artist, Virgil Finlay. Red Jacket Press has published a limited edition facsimile reprint volume of the Arkham Books edition, and have this to say about the story:

"Divided into three sections, Quinn’s tale begins in the days of the Roman Empire, where the mighty gladiator Claus — a barbarian from the frozen Northland — has just finished his term of service in the province of Judea. On the journey back to his homeland, Claus chances upon a poor family under attack and saves them from a murderous band of soldiers. With this selfless act, his life is changed forever. Claus goes on to travel further than he ever could have imagined. Crossing from one end of the Empire to the other and back again, he eventually outlives the power of Rome and the dark ages that follow it, and witnesses the rise of new civilizations on its former lands. Immune to the effects of time, Claus accumulates the wisdom of many lifetimes before discovering the final road he is destined to follow — a path which will lead him to his true calling, and fulfill a promise made to one very special child on behalf of all the children of the world."

You can order their edition here: http://redjacketpress.com/books/roads.html (well worth it, especially for the accompanying Finlay illustrations), or for you digital types, you can get it for your Kindle via Amazon.com at this link: http://www.amazon.com/Roads-Legend-Santa-Seabury-Quinn-ebook/dp/B00E7HNBXA/ref=tmm_kin_swatch_0?_encoding=UTF8&sr=&qid= 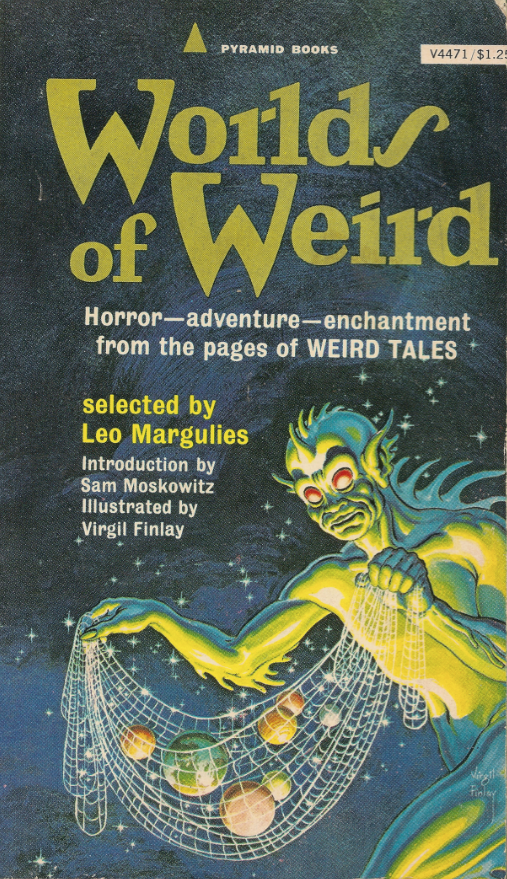 Surprisingly, the story has not been anthologized very often. In fact, I know of only one out of print anthology that carried it, a 1965 Pyramid Books paperback called Worlds of Weird (seen at right), which had a second printing in 1977. For you used book lovers, this is one to keep your eyes open for next time you go on a store run! Plus the cover by Finlay (with a 'Space Santa' and his bag of planets) is rather fitting for the season, yes?

Whatever the format, you owe it to yourself to track down and read this timeless tale. It's one of the best pieces ever written by Quinn and it just MAY change the way you look at a certain jolly fat man for years to come.

And with that recommendation, our time is done. I hope we've entertained, enlightened and brought you some enjoyment over the last few weeks, and have made this season a little less hectic and a little more humorous. Thank you all for reading and for your support and comments. As usual, we'll do it again starting December 1st next year.


Until then, I wish you all the happiness under the moon and stars - Merry Christmas and Happy New Year!

Posted by Conjure Cinema Curator at 5:07 AM