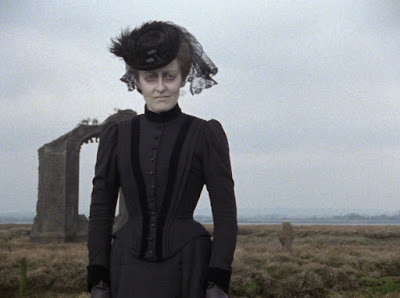 Well, she seems nice ... thought we were going to end this on a cheery note, did you, lads and lasses? Well, we are, in our own special K.A.C. way, by leaving you with one of the most famous ghost stories literature has to offer - and it has ties to Christmas, even if they're the most tenuous, spider-filament-thin ties.

The Woman In Black: A Ghost Story began it's life (unlife?) as a 1983 novel by Susan Hill. Catching the public by storm upon its publication, it has been compared to the likes of Shirley Jackson and Stephen King (although I think the Jackson comparison is much more apt). It's been adapted in a number of media forms, from audiobooks to made for television films to features, and, as Wikipedia points out, it the second-longest-running stage play in the history of the West End, after (Agatha Christie's) The Mousetrap.

My son Justin is a huge fan of this book and has given me some fascinating tidbits about the story, namely that the ending has been changed in each incarnation, from the 'unfilmable' ending in the original story, to the stunning ending in the 1989 television film to the 'happy' (?) ending in the 2012 film adaptation starring Daniel Radcliffe.

I feel the 1989 version is the best of them all, as it takes its time building up a pervading sense of dread until unleashing its true horror literally In Your Face that will have you burrowing in your blankets (as I unashamedly did), but urge you to seek out the original book. Until then, here is the link for the British television version - you know the drill: turn out the lights, turn off your phone and bundle up: things are about to get A LOT colder - enjoy!

Oh, and the tenuous Christmas link? It comes from the original story, when the narrator is asked by children on Christmas Eve to join in telling ghost stories, something it is established he is always unwilling to do each year. With his guard down and his patience gone, he sits down to tell them the One Story that will cure them from ever asking him this again ...

You can read (or hear) the original story online here:

The 2012 film version with Daniel Radcliffe is worth your time, as well, and was the first version of the tale I saw. Having nothing to compare it to, I found it splendidly chilling, yet was surprised to hear the ending had been changed. However, RUN, don't walk, away from the 2015 cash-grab sequel The Woman In Black: Angel Of Death. It's horrifying, all right, but for all the wrong reasons.

You can also find a number of filmed stage adaptations of the story on YouTube worth your time, should you be so inspired. However you decide to view it, you won't soon forget this (literally) haunting story.

After that, you're probably going to want to settle your nerves .... what better way than sitting by the blazing Yule Log, sipping something hot, bundled up and listening to something a bit more soothing to take the chill of that last story out of your bones. Don't have a fireplace, you say? Not a problem! As Bing.com reminds us today, beginning in 1966, "New York's WPIX, Channel 11, replaces its regularly scheduled programming with Christmas music and a shot of a log burning in a fireplace, shot in Gracie Mansion. Viewers cozy up to their TVs, and a tradition is born that will extend to other TV markets and beyond."

Fast forward to 2020 and there are a slew of various Yule Log videos available to choose from. Here's how to set yours up: 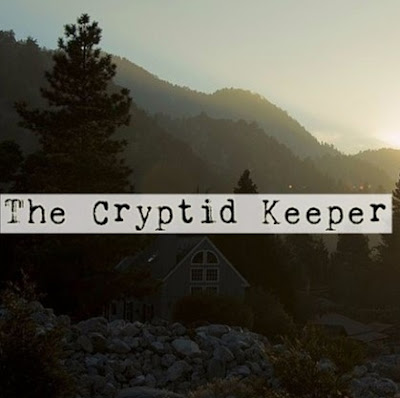 Settle in and listen to The Cryptid Keeper podcast. No, no, calm down, this isn't going to rattle your nerves more with tales of homicidal Yetis or Killer Krampii (Krampuses?) - instead, this episode tracks down sightings of the Jolly Old Elf himself, Santa Claus! I know what you're thinking, "Oh, this is some puff piece for the kids, etc.," wrong again - this is about people Really Seeing Santa Claus ... I don't want to say more and spoil the surprise. It's charming (and OK, a little bit creepy) and the perfect way to end our run this year on the K.A.C. 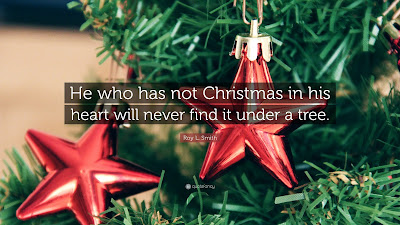 Thanks to my son Justin for finding this and for suggesting The Woman In Black for today's tale, and thanks to all of you for joining me for another year. We'll leave you with one last quote, which on closer look may sound like a familiar riff to a number of my friends, just adapted for the season - until next year at this same time, Merry Christmas and Happy New Year!
Posted by Conjure Cinema Curator at 4:46 AM