I always try during the 24 days of the K.A.C. to include some historical stories, and one of the best (and most well-received) entries was this 'wartime edition' from both World Wars I and II. Reprinted here for your perusal from December 24th, 2011: 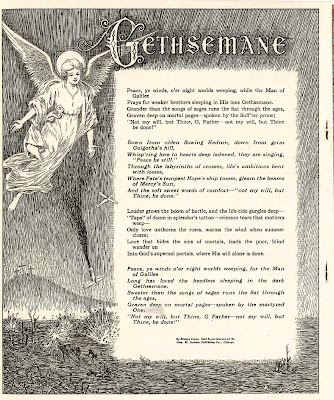 "We end this year's edition of the K.A.C. on a historic note. For me, part of the fun of doing this every year is the different paths my research takes when I pursue topics for the entries, be they odd holiday traditions (like this year's 'belsnickeling') or other items.

Along those lines, I recalled two images in particular from my collection of CHRISTMAS IDEALS Magazine (reproduced here - click on them for a larger copy). If you are not familiar with the magazine, please see my entry dated December 20th, 2010. In addition to the current year, I have tracked down the back issues - it began in 1944 and has been published annually every year since. 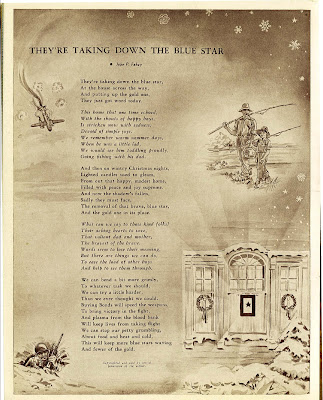 The first two issues (1944 and 1945) coincided with the end of World War II, and along with visions of sugarplums dancing in children's heads were visions of parents wondering and worrying about their sons returning home from the war alive and in one piece. The image at left ('Gethsemane') has always stuck me with its juxtaposition of the angel and the battlefield. It is taken to an all-too-awful conclusion in the second piece ('They're Taking Down The Blue Star'). Being a parent to a teenage boy myself, this has a special resonance for me. I am thankful we live in a time of (relative) peace and that I do not have to contemplate this for my child.

Thinking about these IDEALS pieces then got me thinking about what other wartime Christmas posters and propaganda would be out there. World War II was THE war, as far as propaganda was concerned, on both sides. The Santa and Baby New Year poster was from the same time period and reminded G.I.'s to follow their basic safety rules - they changed depending where the soldier was stationed.  For example, many soldiers were reminded of using their mosquito netting on the battle front to combat malaria and other diseases. It seems obvious now, but if you had never had to deal with these issues before being shipped overseas, then it was something that was constantly drilled into you, both by your sergeant and by the posters. Why? Because (continuing with the mosquito netting example) if you were stationed for an extended period of time on a mission in a location without proper health facilities or supplies, you could be going home in a box for Christmas ...

Our next poster goes even further back, to World War I and Santa with Uncle Sam and an American 'Doughboy' soldier. This was more typical of the posters of the time, promoting peace while in the thick of war. And this leads back to my main post for today: the Christmas Truce.


Having gone to military school for eleven years and studied military history, I was aware of this special moment during World War I, but it wasn't until I dug deeper that I found out the full story, which follows (courtesy of Wikipedia): "The Christmas truce was a series of widespread unofficial ceasefires that took place along the Western Front around Christmas of 1914, during the First World War. Through the week leading up to Christmas, parties of German and British soldiers began to exchange seasonal greetings and songs between their trenches; on occasion, the tension was reduced to the point that individuals would walk across to talk to their opposite numbers bearing gifts. On Christmas Eve and Christmas Day, many soldiers from both sides – as well as, to a lesser degree, from French units – independently ventured into "No mans land", where they mingled, exchanging food and souvenirs. As well as joint burial ceremonies, several meetings ended in carol-singing. Troops from both sides had also been so friendly as to play games of football with one another.
The truce is seen as a symbolic moment of peace and humanity amidst one of the most violent events of modern history. It was not ubiquitous, however; in some regions of the front, fighting continued throughout the day, whilst in others, little more than an arrangement to recover bodies was made. The following year, a few units again arranged ceasefires with their opponents over Christmas, but to nothing like the widespread extent seen in 1914; this was, in part, due to strongly worded orders from the high commands of both sides prohibiting such fraternisation.
The truces were not unique to the Christmas period, and reflected a growing mood of "live and let live", where infantry units in close proximity to each other would stop overtly aggressive behaviour, and often engage in small-scale fraternisation, engaging in conversation or bartering for cigarettes. In some sectors, there would be occasional ceasefires to go between the lines and recover wounded or dead soldiers, whilst in others, there would be a tacit agreement not to shoot while men rested, exercised, or worked in full view of the enemy. However, the Christmas truces were particularly significant due to the number of men involved and the level of their participation – even in very peaceful sectors, dozens of men openly congregating in daylight was remarkable."

As remarkable as the truce itself was, what was even more remarkable was the commanding officer's reaction to it: "Though there was no official truce, about 100,000 British and German troops were involved in unofficial cessations of fighting along the length of the Western Front. The first truce started on Christmas Eve, 24 December 1914, when German troops began decorating the area around their trenches in the region of Ypres, Belgium.
The Germans began by placing candles on their trenches and on Christmas trees, then continued the celebration by singing Christmas carols. The British responded by singing carols of their own. The two sides continued by shouting Christmas greetings to each other. Soon thereafter, there were excursions across No Man's Land, where small gifts were exchanged, such as food, tobacco and alcohol, and souvenirs such as buttons and hats. The artillery in the region fell silent that night. The truce also allowed a breathing spell where recently fallen soldiers could be brought back behind their lines by burial parties. Joint services were held. The fraternisation was not, however, without its risks; some soldiers were shot by opposing forces. In many sectors, the truce lasted through Christmas night, but it continued until New Year's Day in others.
Bruce Bairnsfather, who served throughout the war, wrote: "I wouldn't have missed that unique and weird Christmas Day for anything. ... I spotted a German officer, some sort of lieutenant I should think, and being a bit of a collector, I intimated to him that I had taken a fancy to some of his buttons. ... I brought out my wire clippers and, with a few deft snips, removed a couple of his buttons and put them in my pocket. I then gave him two of mine in exchange. ... The last I saw was one of my machine gunners, who was a bit of an amateur hairdresser in civil life, cutting the unnaturally long hair of a docile Boche, who was patiently kneeling on the ground whilst the automatic clippers crept up the back of his neck."
General Sir Horace Smith-Dorrien, commander of the British II Corps, was irate when he heard what was happening, and issued strict orders forbidding friendly communication with the opposing German troops." 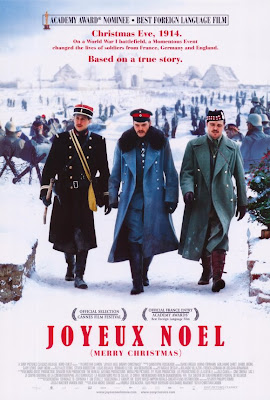 In 2005, a French film entitled JOYEUX NOEL came out about this event, and if you haven't seen it, I recommend it highly. It details the events that happened during the truce (including an impromptu soccer game among some of the troops - one of my favorite discoveries when researching this article is that some of the descendents of the original soldier make it a point to meet every year at the grounds where the Truce took place to celebrate the season and, yes, play soccer in honor of their ancestors).

The Christmas Truce is remembered every year in song - you've heard it a hundred times and probably don't realize it. Don't believe me? Then go and re-listen to the holiday song "Snoopy's Christmas" - I'll even provide you with the link: 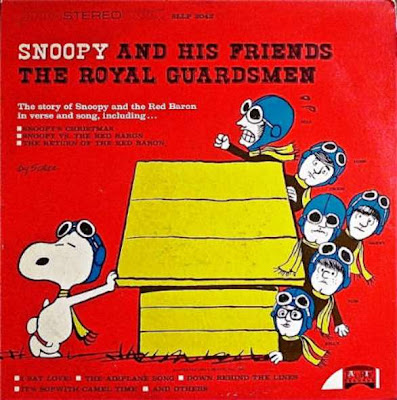 And with that, I declare a Christmas Truce of my own - I promise to stop bombarding you with Christmas Craziness for another year. I do have one last entry, which I'll post tomorrow, that ties in with my continuing Conjure Cinema articles. Thank you for joining me this year and a Merry Christmas and Happy New Year to you all!"

Posted by Conjure Cinema Curator at 7:01 AM