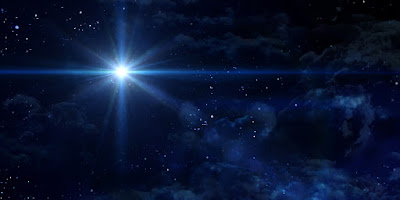 Good morning! We take a short break from out usual foolishness to bring you some exciting news from the world of astronomy. In just a few days (Winter Solstice, December 21st to be exact), Jupiter and Saturn will be in the closest conjunction they've been in since the Middle Ages, forming a 'Christmas Star'! If ever there was a year for this celestial phenomenon to hit, this is it! All the news pages are covering it, and I'm sure you'll hear a lot more about it as it gets closer (it will be literally a once in a lifetime event to see when it occurs) - here's the Old Farmer's Almanac report on it:

This reminded me of a somewhat 'different' explanation for the Christmas Star, which I covered back on December 6th, 2013: "I had an idea for this column regarding the Star (which led me to do more research on it) and came up with some fascinating facts. For example: 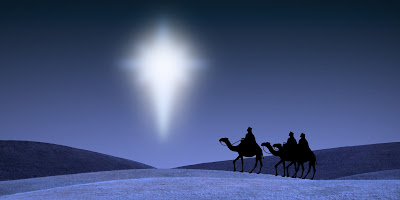 - The Star is only mentioned in one of the four Gospels (Matthew, in case you're curious).

- There have been a number of books and scientific theories floated as to what the Star may have been. They range from comets to novas to (the most likely) a rare conjunction of planets. However even here you hit a snag, as scholars have long debated the actual birth date of Jesus. December 25th is the commonly celebrated date, but there is an ongoing debate that Jesus was actually born in the Spring and the December 25th date was used by early Christians to replace the Roman festival of Saturnalia.

- If none of the scientific reasons work, many turn to the religious, with theories ranging from the Seventh-day Adventist, who say it wasn't a Star at all, but a "distant company of shining angels" to the Mormons who believe the Star was seen that night not just in Bethlehem, but completely around the world at the same time (think on that one for a while) to the most wild theory of all (courtesy of the Jehovah's Witnesses) that the "Star of Bethlehem is seen as a product of Satan, rather than a sign from God, since the star led the astrologers to Jerusalem where they met King Herod's plan to kill Jesus." (Awake! July 8, 1994, pp.6-7 / www.watchtower.org) 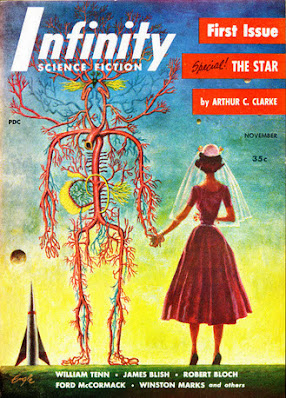 Which (finally!) brings us back to what prompted all this to begin with. In November 1951, Arthur C. Clarke published his short story The Star (cover seen at left). I read it in a science fiction anthology paperback in the summer of 1973 and never forgot it. I could put up a file of the story itself, but found something even better - an audio recording of the story - take a listen!

The story was anthologized a number of times in different collections and on December 20th, 1985, it was dramatized on the remake of THE TWILIGHT ZONE. To read about the making of it (and see the actual episode), direct your attention to the Regulus Star Notes site below:"

Posted by Conjure Cinema Curator at 7:50 AM