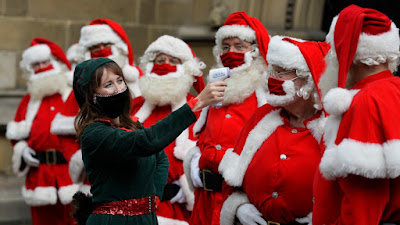 Welcome back! Our second day begins with Testy Santas getting tested by Herself the Elf - just a way of life that El Kringle and the rest of us for the foreseeable future.

Actually, Santa DOESN'T need to get tested! In addition to his bag of Christmas goodies, he's got another magical trick up his voluminous sleeves we weren't ever aware of until this year ... well, ONE man knew. My guess is he was sworn to secrecy, but given the times agreed to break his oath and let the world know. That man is Dr. Anthony Fauci (you may have heard of him) and he broke the news that Santa is safe because he has "... good innate immunity!" Read more about Santa's new skill here! 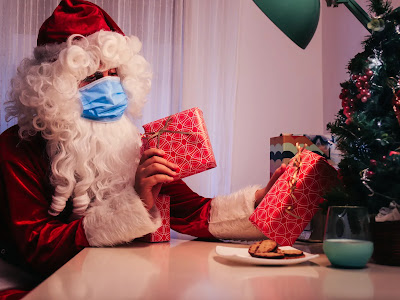 You know who ELSE doesn't need to get tested? CHRISTMAS BADGERS! Originally presented in our November 19th, 2009 entry, this became the signature earwig of the season. Once you hear it, you'll never get it out of your head - give it a listen! 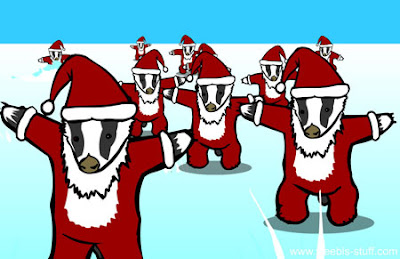 Continuing the animal husbandry theme, we're all about Christmas animals here at the K.A.C., one in particular, namely the Yule Goat, as our entry from 2015 shows ... 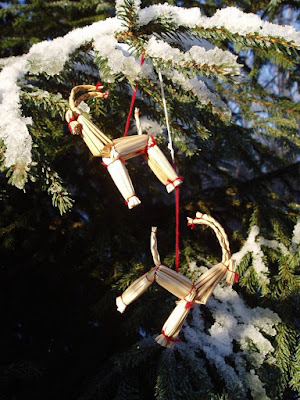 Today we explore the VERY STRANGE history of the Yule Goat. This may be one of the oddest stories I have ever told in the K.A.C. over all my years of writing these entries, so hang on tight!

Many Christmas trees the world over (ours included) have straw Yule Goat decorations and ornaments each year. I started wondering how these capricious critters came to be associated with Christmas and the answer is SO much more bizarre than I ever anticipated. 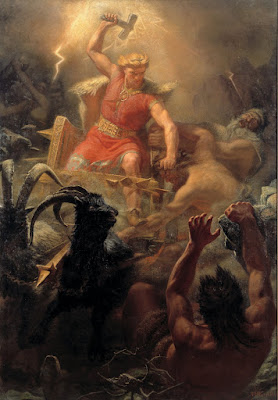 The tale of the Yule Goat begins in Norse mythology and the God of Thunder, Thor. Each day he would be pulled across the sky in his goat-drawn chariot, wielding his magic hammer Mjolnir in his battles with giants, ogres, trolls and the like. The chariot was pulled by two magic goats, Tanngrisnir (meaning "teeth-barer") and Tanngnjóstr (meaning "teeth grinder"). After a long day of pulling his chariot across the heavens and being in the forefront of all his battles, how did Thor reward his faithful steeds? By EATING THEM every night! Yes, you read that right ... he ATE the goats every evening and then would use Mjolnir to bring them back to life the next morning, so they could repeat the process every day! Pull the chariot, get killed and eaten, be brought back to life, pull the chariot, get killed ... well, you get the idea. Sort of a dick move there, Thor - sorry.

The farmers and peasants who heard this tale would then honor Thor with a goat sacrifice and feast as part of their annual Yule celebrations. I somehow doubt these critters came back to life the following morning, no matter HOW many hammers you hit them with.

The tale of Thor and his magical goats spread around to different countries and in Scandinavia it morphed into something else entirely. As mentioned in Wikipedia: "The last sheaf of grain bundled in the harvest was credited with magical properties as the spirit of the harvest and saved for the Yule celebrations, called among other things "Julbocken" (the Yule goat)."


This led to the Yule Goat ornaments and decorations being made from straw, to commemorate the grain. Another interesting (though sadly not-used-nearly-enough) term for the Yule Goat can be seen to the picture at left, with Santa riding said goat. Tucked under his left arm is a basket of presents and food and drink (and what looks, rather disturbingly, like a human head ... but we're going to let that one go for now) - and in his right hand is a wassail bowl. Even today, in Scandinavia, the custom of processing the hot mulled cider from door to door through the villages is called "going Yule Goat". So should someone show up at YOUR door this holiday season dressed like this, inviting you to have a drink from the wassail bowl ... just take it! Otherwise ... umm, did I mention the head there? Yeah ... moving on. 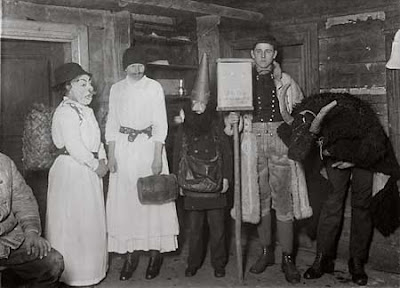 Actually, before we move on entirely, let me give you one more tidbit from Wikipedia: " The function of the Yule goat has differed throughout the ages. In a Scandinavian tradition similar to wassailing, held at either Christmas or Epiphany, young men in costumes would walk between houses singing songs, enacting plays and performing pranks. This tradition is known from the 17th century and continued in places into the early 20th century. The group of Christmas characters would often include the Yule goat, a rowdy and sometimes scary creature demanding gifts."  [Including said Yule Goat to the far right from a 1917 Yule celebration].

"Other traditions are possibly related to the sheaf of corn called the Yule goat. In Sweden, people regarded the Yule goat as an invisible spirit that would appear some time before Christmas to make sure that the Yule preparations were done right.

Objects made out of straw or roughly-hewn wood could also be called the Yule goat, and in older Scandinavian society a popular Christmas prank was to place this Yule goat in a neighbour's house without them noticing; the family successfully pranked had to get rid of it in the same way. 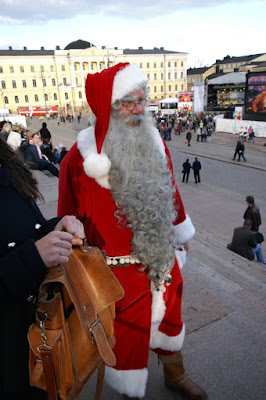 During the 19th century the Yule goat's role all over Scandinavia shifted towards becoming the giver of Christmas gifts, with one of the men in the family dressing up as the Yule goat.


In this, there might be a relation to Santa Claus and the Yule goat's origin in the medieval celebrations of Saint Nicholas.
The goat was then replaced by the jultomte (Father Christmas/Santa Claus)or julenisse during the second half of the 19th century and early 20th century, although he is still called the Joulupukki (Yule goat) in Finland, and the tradition of the man-sized goat disappeared."

The tradition of a scary Yule Goat going from house to house was adapted and transformed in the Germanic countries into the Krampus, who stepped up the terrorizing aspects by going after bad children and either hitting them with switches or grabbing them to put into his sack and drag away, all under the watchful eye of Saint Nicholas. See, I TOLD you Krampus figured in to this story eventually!   :)

But I've saved the best for last. Let's turn now to Finland and their version of Santa Claus, the Joulupukki. See this fine fellow on the left? Let's take a closer look: red coat and trousers, check. Red hat with ball on end, check. Long beard, bushy eyebrows, check. Shiny belt accoutrements ... OK, we'll give him that one. Check. Why, then, is HE known as the Yule Goat in Finland? Because UNDERNEATH all that Santa-like regalia is his TRUE FORM, which looks something like THIS! 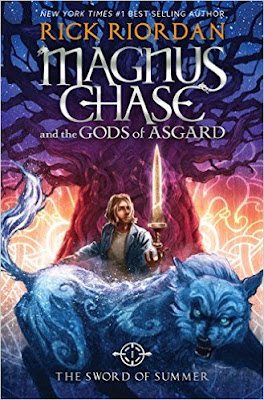 One quick note: my wife has informed me that Thor's goats from the beginning of this article show up in Rick Riordan's latest mythology mash-up book, Magnus Chase and the Gods of Asgard. Since their names are so hard to pronounce, they tell Magnus they are going by Otis and Marvin ... and yes, Thor is STILL eating them every night and bringing them back to life the next day - seriously, Thor? 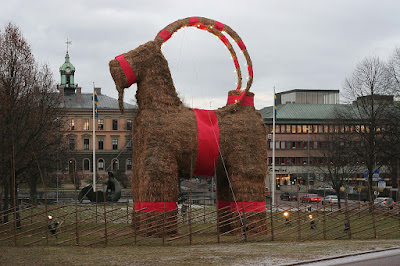 Which brings us back to the present and the straw Yule Goat ornament. Many Swedish towns erect a giant straw goat each year for Yule, such as the Gavle goat seen to your left ... and almost every year the goat is burned to the ground before the season is over, either on purpose or by arson ... so Thor continues to get his sacrificial goat in modern times, even if it is made of straw. And many a Christmas tree will have their Yule Goats prancing in their branches, both in celebration and remembrance of earlier, wilder times and in hopes for prosperity and abundance in the year to come.

I know what you're saying right about now ... "Hey, where can I get my OWN Yule Goat?" Well, we wouldn't just TELL you about it - Grimfrost has ALL your Yule Goat needs - preorder now! Thanks to Joann for the link:

Posted by Conjure Cinema Curator at 4:18 AM