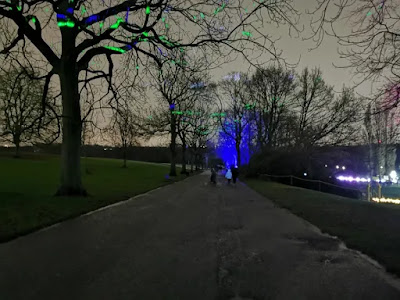 Good morning! What dark, eerie, beckoning shape is this that's rapidly approaching? Just the latest in a L O N G stretch of UK disasters, in what I've affectionately termed 'Grotty Grottos'. These 'Christmas Festivals' pop up every year in some farmer's field or open space and heavily advertise their 'fun for the whole family' wares, rides, visits with Santa, etc., and almost invariably come crashing down in one form of disaster or another. Below I've highlighted a few of my favorites the past, but before we get to them, let's salute the 2020 version!

Given the whole pandemic/social distancing/COVID situation around the world, you can't really get away with the traditional Grottos, so some enterprising souls have changed them to 'drive-throughs', where you stay in the car and go through a maze of festive lights and Christmas displays a few miles long. It's an idea that's caught on big this year, is safe and fun for the kids. Families go online, purchase their tickets ahead of time, show up during their allotted time slot to take their tour ... what could POSSIBLY go wrong?

Well, when a headline slaps me in the face about 'Furious Visitors Greeted With Pitch Black Endless Hell', I'm TRIPPING over myself to get to that link in record speed! Behold the seasonal joy of Lightopia!

2016 was our best Grotty Grotto year for the K.A.C., with three in a row coming fast and furious, one after the other. Let's begin with our first two, originally reported on December 11th: 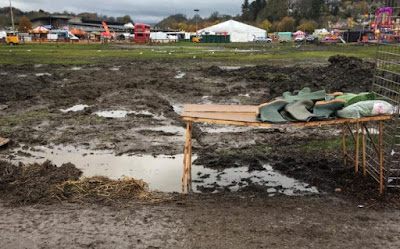 "Let's hop across 'The Pond' and take a look at not one, but TWO disastrous 'Winter Wonderlands' going belly-up in England. First up is THIS mudhole in Derbyshire - imagine getting your tickets in advance, getting in the car with the kids who are all excited to see Santa and reindeers, go on all the rides, see the lights, eat the junk food, etc. ... and when you get there, THIS is what you see! The Telegraph (UK) of November 20th has the whole story: with a headline that reads 'Winter Wonderland attraction branded a 'rip off' and 'shambles' after there was no Santa', you KNOW it's going to be good (in a Schadenfreude sort of way) - read all about it below!

But wait, there's more! Here's the follow-up story on the 'festive' Winter Wonderland, including the teary story of the little girl who said, "I don't want to see Santa again" - 'Moment girl, 2, is left close to tears at Bakewell Winter Wonderland after waiting for two hours to see Father Christmas in freezing mud'. 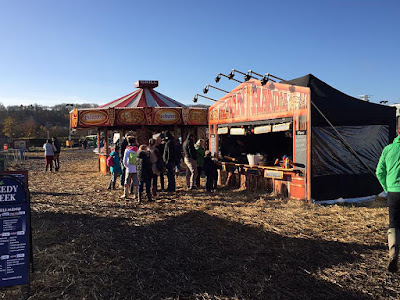 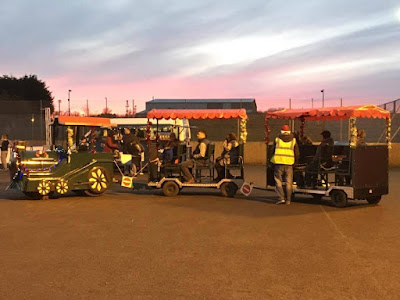 OK, anyone can have a bad day. You complain about the absolute grottiness of the whole affair and maybe (maybe) get your money back. You promise your crying tykes that you'll take them to Cumbria for a REAL 'Winter Wonderland' tomorrow instead. Once again, you buy the advance tickets, bundle your slightly traumatized kids into the car and head out. It CAN'T happen to you TWICE in one year, can it? Ahem ... allow me to quote the Sun (UK) headline of November 21st ... only ONE day later than the above story: 'WE HAD MORE FUN WALKING HOME' Inside Cumbria's 'winter wonderland' where the ice rink flooded and Santa was sacked for SMOKING'. The sub-header is even better: 'Families say they queued for over one-and-a-half hours to see 'scary' Father Christmas in an inflatable grotto' - for the full story, click here!"

When I first covered these, I figured that was that, I was done for the year ... but two days later, on December 13th, 2016, we ALL got a surprise! 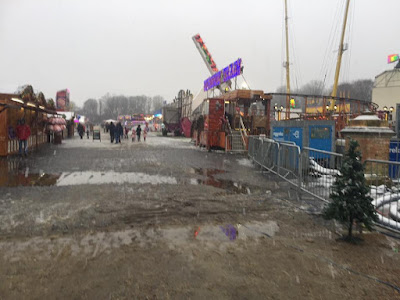 "Breaking News! Minutes after I posted today's page, comes news of yet ANOTHER Winter Wonderland disaster - read all about 'Santa's Mudbath' here!

I actually was patiently WAITING for this story to hit - it seems this happens nearly EVERY YEAR in England - and yet the desperate parents keep going back, time after time, hoping for the best and expecting the worst. We've covered a number of these Santa Shenanigans over the ages here at the K.A.C. and we're always on the lookout for more - keep 'em coming, England!"

Can I tell you how delighted (pun fully intended this year) I am that they keep managing to screw these up? It's now a yearly tradition here at the K.A.C., and our Santa Hats are off to them for keeping it alive in this dark, dark year of 2020 ... see you tomorrow!

Posted by Conjure Cinema Curator at 7:42 AM