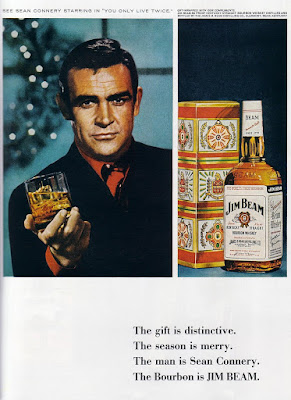 Good morning - before we get to today's shenanigans, we'd like to pause and give note to the passing this year of Sean Connery, seen in this vintage holiday ad for Jim beam when he was making the 007 extravaganza You Only Live Twice (1967). RIP. 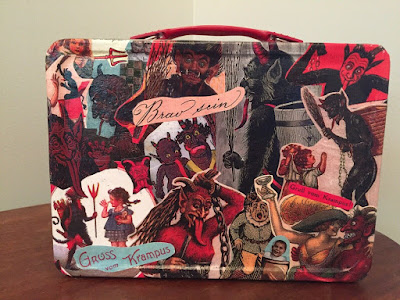 As I originally wrote on December 5th, 2013: "Today we celebrate our K.A.C. mascot, KRAMPUS! Why? Because all over Europe, today (December 5th) is the Eve of Saint Nicholas, also known as Krampus Night or Krampusnacht. He was the star of our very first entry on November 12th, 2009, and has been haunting these pages ever since! His tale has been told and re-told across the Continent and slowly but surely he has made his presence known here in America ...  The busy one has been stuffing naughty children into his sack for a LONG time - how long exactly? Per Wikipedia:


“The history of the Krampus figure stretches back to pre-Christian Germanic traditions. He is sometimes said to be the son of Hel, from Norse mythology. He also shares characteristics, including goat-like ears, legs, feet and feet, with the satyrs and fauns of Greek mythology. The early Catholic Church discouraged celebrations based around the wild goat-like creatures, and during the Inquisition efforts were made to stamp them out. But Krampus figures persisted, and by the 17th century Krampus had been incorporated into Christian winter celebrations by pairing them with St. Nicholas. 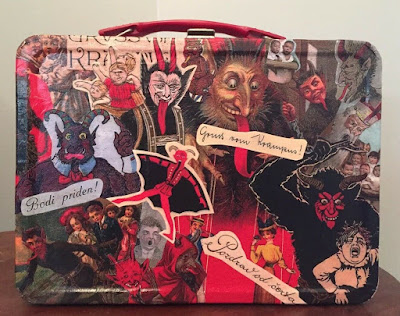 Countries of the former Habsburg empire have largely borrowed the tradition of Krampus accompanying St.Nicholas on 5 December from Austria. However, in the Czech Republic and Slovakia the mythological figure (called čert) evolved from the Slavic demon chort and although nearly the same in appearance, it comes from a tradition distinct from that of Alpine nations.”

He's evolved over the years to a pop culture icon, and we couldn't be prouder! I scored this sweet handmade Krampus montage lunchbox a few years ago on Etsy - just the thing to keep your food hot!

Speaking of the Big K., he's also a musician! He and his friends have been featured before, playing their earwig accordian tune once you hear it, you can't stop! 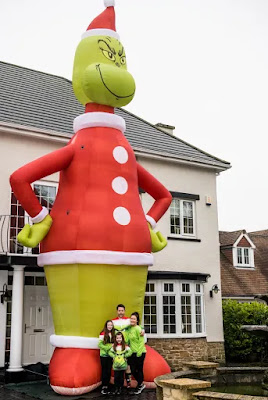 We'll end the day with ANOTHER cautionary Christmas tale (we get a LOT of those here!), and this time, it's a caveat emptor story ...  but surprisingly, one with a GOOD ending for a change (we DON'T get a lot of those here!) - the story of a Dad who wanted to make his Grinch-loving daughter happy by buying her an inflatable one for the yard, which grew and GREW AND GREW ... to the tune of 35 FEET TALL! Dad, didn't you ever watch the show? That whole 'heart grew THREE sizes that day' should have been a dead giveaway! Read all about it here, THEN read the story attached to the end of this one - now THAT'S the kind of Grinch story we can get behind here!

Posted by Conjure Cinema Curator at 4:24 AM