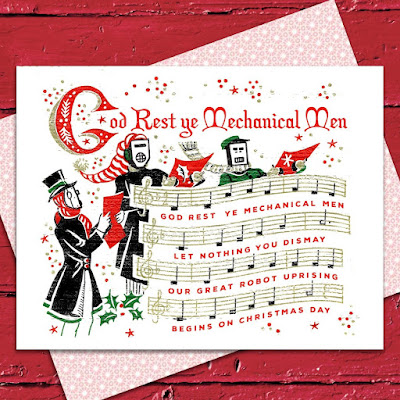 Our final five days begins with a followup story of a tale I originally reported on December 9th, 2009, which you can read below. The tale has been expanded considerably, so I'll put up the recent links, as well. 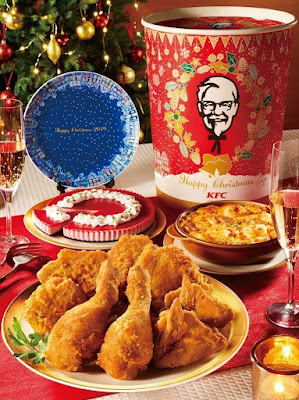 It's a famous story of how a Japanese businessman/entrepreneur/restaurant owner convinced an ENTIRE COUNTRY that the traditional American Christmas Meal was ... wait for it ... Kentucky Fried Chicken! The best part? The country BELIEVED it and now, more than ever, Christmas in Japan is not complete without a family 'Christmas Party Barrel' (pictured here is the 2019 edition). Pocket reports: " Every year, millions of people across Japan celebrate Christmas around buckets of Kentucky Fried Chicken. Families order “Party Barrels” weeks in advance, which in 2019 were replete with cole slaw, shrimp gratin, triple-berry tiramisu cake, and, of course, fried chicken. Santa-clad Colonel Sanders statues stand at attention outside storefronts, grinning mutely through December as KFC Japan sales multiply tenfold, earning the chain a third of its annual income. The corporate promotion is one of Japan’s longest-standing Christmas traditions."

Lest you think this is a recent phenomenon, think again: this started back in 1970! It was even covered on PBS back in 1981 in an Enterprise episode entitled, 'The Colonel Comes To Japan', which you can view here:

My original write-up in this story from 2009 can be found here:

And the two-part story that delves into the entire history of how this came to pass can be found in the two articles below: 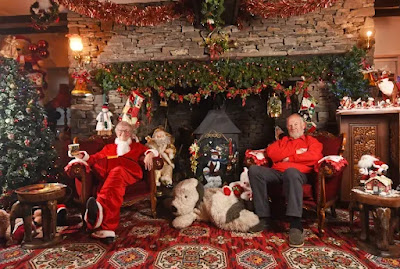 After getting your 'Christmas Party Barrel' (Mmmmm, shrimp gratin ...), you're going to need somewhere to eat it, right? Why not stop by and see Betty Ann Jones - she LOVES Christmas! Hubby, not so much. This charming (and expensive!) story of how opposites attract is a passive-aggressive holiday tale like no other. Read on! 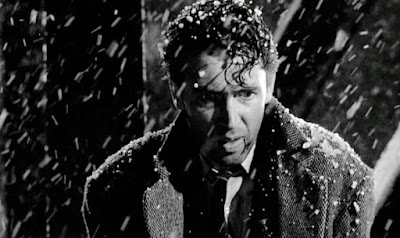 Our final story of the day regards an annual Film Favorite this time of year, celebrating its 75th anniversary: Frank Capra's It's A Wonderful Life. A new story reported on by The Express (UK), reveals something I was not aware of until now - find out what it is below. Even George Bailey is surprised, and he LIVED IT!

We hope YOU will be surprised by our Final Four offerings - see you tomorrow!

Posted by Conjure Cinema Curator at 8:51 AM