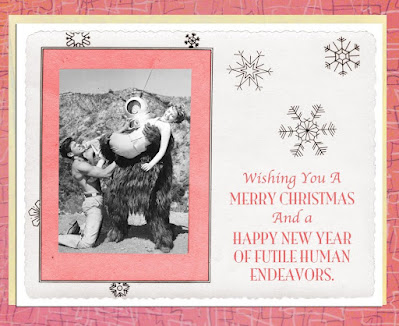 One week to go! Long time readers of the K.A.C. know who comes visiting each year when we hit the one week mark ... Robot Monster! Wait, what? That's not right ...

No, we're talking about Hardrock, Coco and Joe! For those of you new to the K.A.C., a bit of explanation is in order, as I originally wrote way back in 2010: " Today (as on every December 18th) we celebrate the anniversary of one of our K.A.C. favorites, 'The Three Little Dwarfs'. Not familiar with it? Read on ... 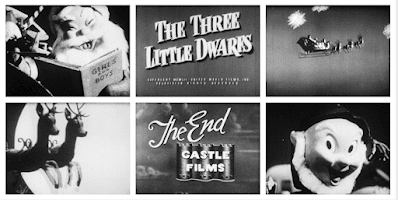 The above description comes courtesy of Chicago's Museum of Broadcast Communications (which you can subscribe to online to see their holdings, as I have - it's worth it if you're interested in early TV).  A number of our readers grew up in the area or surrounding areas and remember these appearance on their TV of these three lads as the OFFICIAL start of the Christmas season!" 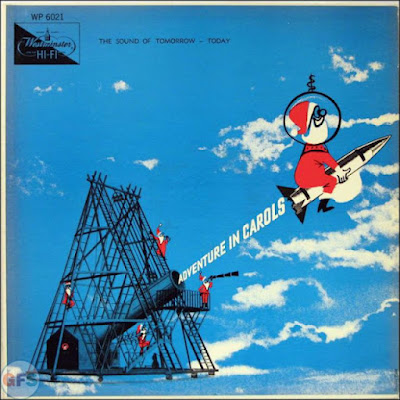 Speaking of Holiday Earwigs, I have got the GRANDDADDY of Holiday Music channels for you to listen to. It's a YouTube channel called Christmas Records and, as of this writing, there are 257 full length vintage Christmas LPs up on it, all lovingly restored for optimal sound. It has been my constant companion since October as I research and write up these entries, and I'm only on album # 160! So if you need background music during the next week while you cook, write cards, wrap presents or just relax, look no further! 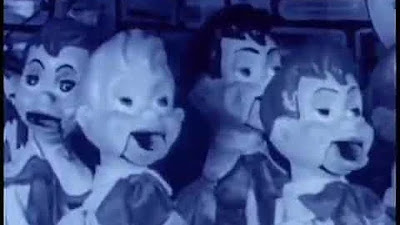 Lest you think we've gone soft here in the final week and are presenting nothing but HAPPY musical interludes, gaze upon the picture to your right. There is a fine line between charming and chilling, and this next item roars across it at top speed!

I spend FAR too much time each year researching and looking for the Hidden Holiday oddities and am (usually) happily surprised with what I find. That is NOT the case here - part of it is I am pretty skeeved out with anything to do with puppets or mannequins (sorry, JK!). While following a lead on something else entirely, I caught mention of this nugget: from 1953 and produced by the Boys Club Of Phoenix, The Elf and Mr. Little was a short made for TV about (to quote KS at ClassicCouple.com on IMDB): " ... marionettes in a story 13 minutes long about Mr. Little a grumpy old toy-maker who has lost his Christmas spirit feeling the pressure to make toys during the season. The toy-maker makes a deal with an elf to help him make toys at Christmastime in exchange for letting the elf have anything in the shop that he wants when his work is done. Throughout the season the elf works away while each night a little girl accompanying a group of carolers peers at a doll in the shop window. Once the elf completes his work, he asks Mr. Little for the doll in the window. Curious to know what the elf wanted with the doll, Mr. Little follows him to a church where the elf presents the doll to the little girl. After witnessing the selfless exchange, Mr. Little's heart is changed, and his Christmas spirit is returned. An unusual production, The Elf and Mr. Little was filmed in the Boys Club of Phoenix using a boys choir to sing the songs of the marionette choir. Some releases show it in black-and-white, others with a blue tint." 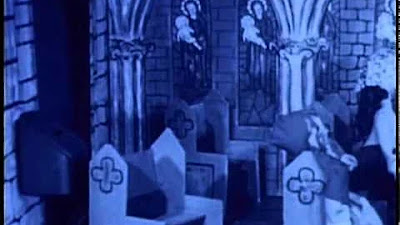 So essentially you've got a bit of the Grinch and a bit of Scrooge all mixed together in Mr Little, until he's shamed into being a better puppet by the Elf's charitable act. While Puppet Shaming is never condoned here at the K.A.C., we'll let that pass this time, as it all works our for the best in the end. The hardest part I have with this whole production is NOT with Mr. or Mrs. Little (don't get me started on HER) or even the Elf or the Little Girl; no, it's the CHOIR, man - the angelic voices coming out of those DEAD-EYED, NO EXPRESSION row upon row of Performing Puppets! I (barely) made it to the end and then the whole 13 Minutes Of Terror throws down its final card during the end credits and goes all 'Music Of Erich Zann'-Lovecraftian mode with some poor soul who's completely snapped hearing and seeing them and in his madness is dancing and fancying himself the choir leader, while dressed in rags. What's that, you say? Just a villager enjoying the Christmas Carols? SURRRREEE It Is - tell that to his family. That blue tint is me watching it out of my Frozen With Fear eyes!

Did I mention I get TRULY skeeved out by puppets? Don't take my word for it - watch it yourself!

Posted by Conjure Cinema Curator at 4:49 AM