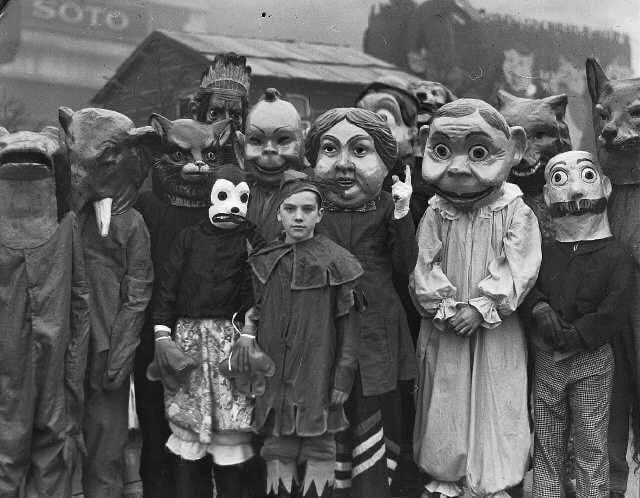 Welcome back! Although this looks like some sort of folk horror about to go down for some unsuspecting city bumpkin who took a wrong turn in his fancy motor car through an off-the-beaten-path town, we're assured that is not the case, as the photo mentions it's from 'The Toyland Parade, kicking off the Christmas shopping season in Tacoma, WA, November 27, 1936.' Thanks to Robin for the link to start this year's shenanigans off on the right foot!

If you were around for 2019's articles, you remember we featured Christmas rarities on the radio ... well, we've taken a page from these forward-thinking villagers here and are dipping our toes into that new-fangled technology called 'television'. What's that, you say? A bunch of malarkey? It will never catch on? Now, now, just hold on a second - give it a chance! There's some mighty fine programming out there, especially of the holiday variety. The problem with most of it is it was aired once and then disappeared, with the broadcast waves entertaining the folks on Alpha Centauri by now! Until today, that is, as we bring forth from obscurity these Christmas Miracles - first up, Raymond Burr (who we featured back on December 12th, 2019, in one of our radio dramas as an ex-con coming home from the klink to make a couple's spirits anything but bright for the holidays); he's mended his ways in this Family Theater production, which aired on December 25th, 1952. Here he plays Balthazar, one of the Three Wise Men, with a twist: he's a skeptic about this whole 'Holy Child' thing, going along to scientifically disprove the prophecies written in the Zoroastrian texts.

There's much to delight in this half-hour drama, including character actor Morris Ankrum taking a break from all the military types he played in epics such as 1957's The Giant Claw, here playing a glowering, paranoid Herod, sending the Magi on their way to find the Child and report back to him its whereabouts, so he may come and honor Him; as they leave, he gives a parting shot of, "Be this child a Prince of the land or Prophet of God ... He must die"; and Bronson Canyon, one of Hollywood's most famous cave locations in such 1950's classics as Robot Monster, Teenage Caveman and It Conquered The World, filling in for the Manger, as Magi, servants and some very well-fed camels come to the end of their journey! 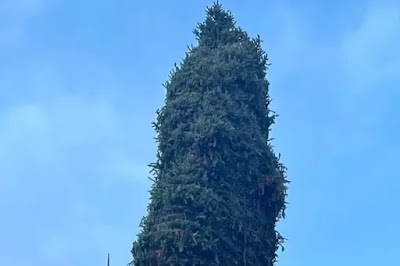 So you don't start to worry and ask yourself, "Hey, is this whole site going to be nothing more than wholesome old Christmas TV episodes?", never fear! Let's put on our 'we're all 12 here' caps and turn our attention to the rather ... rude ...tree to your left. The whole Tall Tale can be found at the link below:

There - THAT should have balanced the scales QUITE nicely! Come back tomorrow for our next edition!

Posted by Conjure Cinema Curator at 6:19 AM