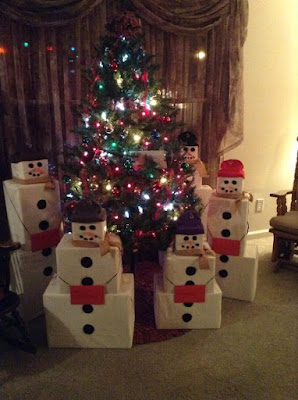 Good morning! No, this isn't a Bizarro Christmas, or a Minecraft Christmas, or whatever else you're thinking. It's actually a rather clever idea and it comes from April Woolfork, who writes:

"Have y’all seen this? Each kid has their own snowman to unwrap and the bottom gift is a toy, the middle gift is clothing, the top is their favorite snacks, and the card is either cash or a gift card! Super cute idea and keeps you from going overboard!"

Thanks to my cousin Trish for the link!

If you're traveling this holiday season, or in the middle of July, or ANY of the 365 days of the year and you want a little bit of Christmas to cheer you up year round, head on down to Louisville, Kentucky and stop in at the Christmas Morning Cafe'! The menu is somewhat small, and all Christmas themed, but you're going for the AMBIANCE, my friend, and this place has it in abundance! Take a look a the news clip about it below:

Intrigued? Then jingle all the way over to their website and start planning your Christmas Feast now - will it be the Pere Noel French Toast? Or maybe Rudolph's Fresh Berry Crepes? Ebeneezer Scrooge's Billionaire Bacon? I think you get the idea - to see ALL of the selections, head to their website below: 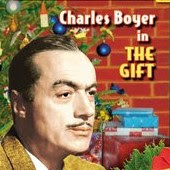 Our next episode of rare Tinseltown TV comes from 1953, and is an early example of Dickens' A Christmas Carol being adopted for modern times, before EVERY TV series did their version of it. This one is much more subtle, starring Charles Boyer as successful businessman Carl Baxter, who has turned his back on Christmas because his estranged son became a geologist instead of following him into the family business ... hey, there's stranger reasons! Snapping at his staff and berating a charity worker who shows up during the office Christmas Eve party, Boyer does an excellent turn as an aristocratic ass who needs to learn a lesson. Co-starring Maureen O'Sullivan as his long-suffering wife, Carl's conscious says, "Hold my brandy", and takes him on a trip of shame, regret and self-redemption - all in the space of 26 minutes! Get out Aunt Ev's Christmas hankies and be ready to use them as you watch Four Star Playhouse's episode, 'The Gift', directed by a young Robert Aldritch:

I'm too choked up to go on *sniff* - more tomorrow!

Posted by Conjure Cinema Curator at 5:14 AM