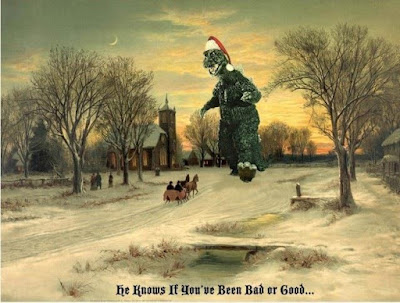 Ho, Ho, ho and back we go, to our next early TV tale of Yule Lore. This episode and I go way back: I have been a film collector since childhood, starting out with an old Super 8mm projector, small screen and a few Castle Films. As you can tell from reading my NON-K.A.C. film reviews on this blog, it became a life-long hobby/obsession.

Not just the watching of films, but the collecting aspect: all of the other forms of physical video data: VHS videotapes (I somehow missed Beta, which mystifies me to this day), Laserdiscs AND CED Video Disks (with needle ... as my friend Mark and I say, "See the movie in HALF the time!", since the damn needle skipped ALL THE TIME, hence why Laserdisc ruled THAT format war!), DVDs and Blu-rays (ESPECIALLY 3-D Blu-rays), LED video projectors to watch it all and (SADLY), NOT One Universal Remote To Bind Them! Hang on, I'm getting back to how this all started.

That inventory being said and out of my system, STILL my favorite physical medium is 16mm film. I graduated to it a few years after the Super 8mm bug, and have never looked back. I ran our college film program, with 16mm licensed prints and two side by side Kodak Pageant projectors, each reel holding 45 minutes of film to a ninety minute feature. The heady thrill of getting to the time to switch from Projector A to B seamlessly in a room full of crazed Saturday evening Movie Night college students, who are EAGERLY waiting and happy to tell YOU, YOUR FRIENDS AND EVERYONE IN EARSHOT WHAT A RUBE YOU ARE FOR NOT TURNING THE PICTURE/SOUND ON IN TIME, OR WHY HAVEN'T YOU TURNED THE LAMP OFF OF THE FIRST PROJECTOR, WHY AM I SEEING JUST A WHITE SCREEN, I CAN'T SEE THE PICTURE, IT'S TOO LOUD, MY LIFE IS RUUUUUIIIIINNNNEEEEDDDD ... WHY?????? - is a thrill like no other (not that I WOULD KNOW!).

Ahem ... moving on. I've had and lost three film collections over time, thanks to the Wings Of Fate, and always thrill to see some new title I was unaware of on eBay. Which brings us, in an admittedly long-fashioned way, to today's tale.

One day on eBay I had bid on a 16mm film blind lot buy. Someone had these, didn't know what they were or wanted them, you bid and you took your chances. My luck runs PRECISELY 50/50 on these lots: sometimes they're a pleasant surprise, sometimes they're absolute dogs. In this particular case, I won the auction, sent the payment and awaited my five films. All were on 1200' reels (such as this). I knew each one was a half-hour show of some sort or some short, as 1200' reels only hold 30 minutes of film.

The day arrived, I watched them all, and was pleasantly surprised to find they were five episodes of various early TV shows, none of which I'd heard of. One of them in particular was a wondrous Western nativity tale, set in modern times, directed in 1945 by a young Don Siegel, which won the Academy Award in 1946 for Best Short Subject (Two-Reel). Character actor J. Carrol Naish carries the heavy acting duties here, in a tale that, as IMDB describes: 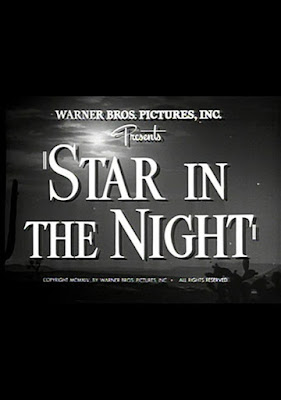 "Three cowboys riding across the desert with gifts for no particular recipient, see a distant bright light and find it comes from the Star Auto Court sign where the owners and guests work together to help a young pregnant wife and husband."

The three cowboys bearing gifts is a lovably unapologetic stretch which works in this charming Nativity tale of another kind, Star In The Night:

Perhaps those cowboys could bring some additional gifts to the people of London, specifically the Trafalgar Square area, as the delivery of their annual Christmas tree from Norway is NOT getting rave reviews: from 'a national embarrassment' to 'looking half dead' to my personal favorite, "Who upset Norway?" To understand that last one, go to the two articles below to get the back story of the Trafalgar Terror: 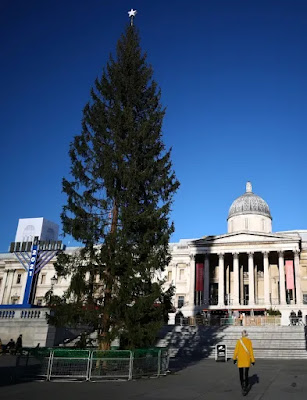 Back with more tomorrow as we begin our final two weeks countdown!

Posted by Conjure Cinema Curator at 5:59 AM