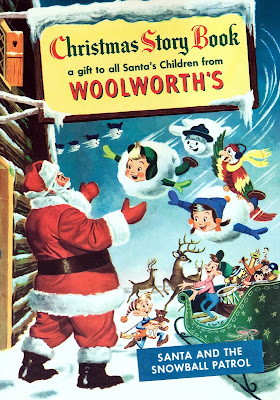 You know Dasher and Dancer and Donner and Blitzen, but do you recall ... the strangest SNOWBALLS of all??? Allow me to introduce you to Santa and the Snowball Patrol! We've talked about the Sears Wish List Catalogue in these pages before, a brilliant marketing ploy when Sears was riding high (in pre-Internet days) and would send Every Home their GIANT catalog with illustrated pictures of all their items: something for Mom, something for Dad, something for the home ... and a WHOLE lot of mouth-watering somethings for the kiddies! These catalogs were large enough to stun an ox and were whisked off with toys, etc., circled with care, in hopes that Santa's Elves were Sears shoppers and knew what to bring on that Special Night.

Seeing the profit margin that Sears was pulling in year after year with this book, other stores soon followed suit, such as Sears' lesser competition J.C. Penney's and Montgomery Wards. Then the even SMALLER budget stores got into the act - not being able to reproduce the massive Christmas printed behemoths the big stores were able to put out, they went completely in the other direction and aimed STRAIGHT for the kiddie market, putting out comic books that were thinly-veiled toy circulars aimed straight at Mom's purse and Dad's wallet! As the Woolworth's Museum website relates: "Woolworth faced a much stiffer challenge in the USA in the 1950s. The stores faced intense competition from S.S. Kresge, J.J. Newberry, W.T. Grant and Kress. Executives used catalogues and advertising to fight back, showing great skill and creativity to engage a new generation of shoppers by targeting children and cost-conscious young families. One key tactic would be controversial today. Catalogues were dressed as comics and were given away to children. Executives shamelessly generated 'pester-power' by placing bold advertisements on alternate pages alongside the comic strips, encouraging kids to drag their parents to the stores for toys and games, knowing that once they set foot inside the adults would be drawn to splash out on the array of homewares and fancy electricals that adorned their displays."

What's that, you say? Shameless marketing ploy? I KNOW! I'm as SHOCKED a company would do such a thing as you are! Not like today, right? Welllll .....

I haven't seen the whole comic from 1953, as it fetches a pretty penny these days, but the basic story is Santa enlists the help of the Snowball Patrol to deliver all the presents on time on Christmas Eve. It doesn't answer the bigger question of just who ARE the Snowball Patrol? The ones flying high on the top left of the cover (click on the top picture for a larger view) look vaguely militaristic - are they the ghosts of airmen shot down over the North Pole during World War II? Are they the doom-laden spirits of frozen explorers, cursed to ply the Arctic winds for all eternity, or until Santa calls upon them to escape their frozen Hell for one night each year to act in servitude to him? OK, I may be reading JUST a bit more into this than the comic book intended (trust me, this is NOT a new thing - just ask my beleagured wife and son! :) ) - but there's a REASON the family in the last panel of the comic, ESPECIALLY Mom and Dad, are nervously joyous as Santa and the Patrol fly AWAY from their house, happy to see another dawn thanks to their Mammon-like sacrifice to Woolworth's! Or something like that ...

I've saved the best part for last. I came across this eldritch tale while researching something completely different, as so often happens. Take a look at the Woolworth Museum's link below, as it talks about the history of the 'Woolies' catalogs from 1929 - 2008. It's LOADED with vintage illustrations (just check out those PRICES!) - but the part that is truly fascinating is the majority of the article is about the UK Woolworth's and the reminisces of Christmas Pasts seen from across the pond. Here you go:

Posted by Conjure Cinema Curator at 6:54 AM